While at Bernie’s house we did not have the time to complete all the tweaking the longerons still require. The first thing accomplished back at the DOG Aviation production facility was to cut the longerons to the proper length. While at Bernie’s house we did not want to take the time to actually cut the longerons so a hacksaw was used to make starter groves at the proper locations for the cuts so the cuts could be finished later. After the longerons were cut to the proper length, the plans have the builder make a 4 degree inward bend for the last 6 inches of the longeron. The plans also give the builder the option to make a weight reducing wedge cut along the last 6 inches as well. I elected to make the weight saving cut so marked the longerons and ran them through the band saw. 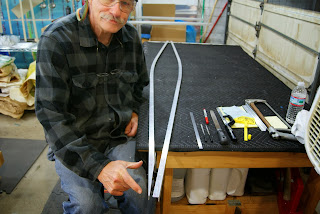 Longeron on the left has the weight saving wedge cutout completed - the longeron on the right is marked and ready to be fed into a hungry band saw.

The optional weight saving cut was made prior to making the 4 degree bend so don’t know if it would work better doing it the other way … suspect not. The longeron was clamped in a vice and whacked with a soft faced mallet until it was beat into submission. Of course, the other face of the longeron got twisted … so it was yet another game of two steps forward, one step back as the longeron was bent on one side and straightened on the other until the 4 degree angle was set. This process takes a considerable amount of time to complete so patience is a virtue. I used a digital level to confirm the 4 degree bends. 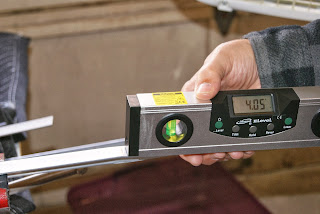 Using the digital level to confirm the aft 6 inches of the longeron is bent inward at a 4 degree angle.

Because the weight saving angle cut confuses the eye, it does not look as thought the aft ends of the longerons are bent inward 4 degrees. However, if straight edges are placed along the longerons as a reference, the inward bend is clearly noticeable. 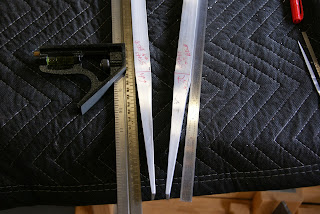 Straight edges placed along side the longerons so the 4 degree inward band can be easily seen. 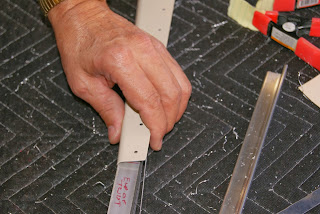 Placing a .025 scrap of aluminum on the outer face of the longeron to use as a gauge for adjusting the overlap of the F-1234 canopy deck prior to match drilling. 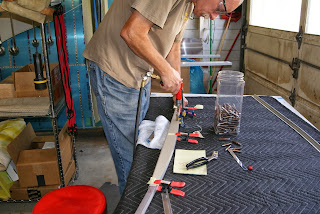 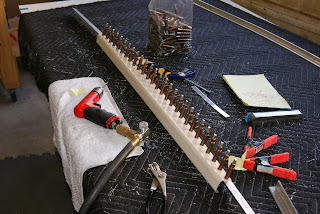 One longeron completed … one to go. 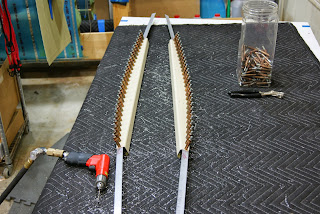 Both longerons match drilled to the F-1234 canopy deck.

Now that both longerons are to final shape and matched drilled, they are ready for deburring, cleaning, scuffing and primer. One good thing about the match drilling is there will now be holes available for hang the longerons during priming and while drying. A cold front that looks like it will bring winter temperatures with it is about to hit … so will have to prime tomorrow outside in the cold … but keep the shop warm so the Akzo epoxy primer cures properly.
Posted by John at 7:27 PM