The amount of fuselage parts remaining that will receive primer is quickly dwindling … there is still the glove box parts (frankly they could wait until spring since it is optional and can be installed later), the panels that will make up the instrument panel’s front face (which I’m inclined at this point to have powder coated), a plate the throttle and choke cables will attach to (undecided about paint or powder coating) the longerons (which still need to be bent to shape) and the oil tank mount bracket/battery box.

Decided today would be a good day to tackle deburring the parts necessary for the oil tank side brackets and battery box while at the same time, knocking out the service bulletin pertaining to the parts. The F-1201E-L&R oil tank side brackets and F-1201G rib make up the oil tank mount and the battery slips into a slot created behind the F-1201G rib. After the deburring was completed on all the parts, the service bulletin was addressed. 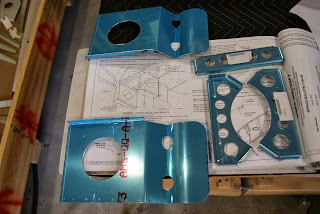 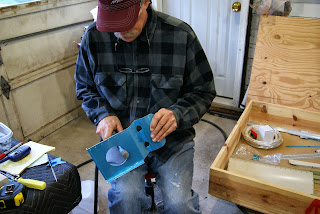 Deburring the edges of one of the F-1201E oil tank side brackets.
Service bulletin 13-04-05 was issued to address cracks forming along the base of the lower flange of the F-1201E-R oil tank side bracket as reported by several RV-12 owners. Van’s addressed the issue and came up with an eloquent solution to the problem and sent the fix free of charge to affected RV-12 owners. The fix involves installing a second F-1201G rib near the base of the F-1201E- L&R brackets to better distribute the load from the oil tank and reduce vibrations. In the last photo bellow a finger is pointing to the area where the small cracks were appearing.
The additional rib is called the F-1201G-Mod and is identical to the F-1201G rib except it has no pre-drilled mounting holes. The service bulletin directs the installer of the service bulletin to drill four holes at specified locations on the F-1201E-L&R brackets. Using the newly drilled holes the F-1201G-Mod rib is then match drilled. 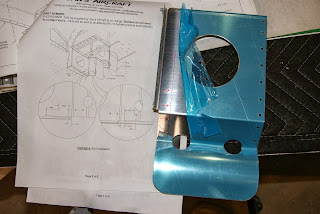 Rivet hole locations per the service bulletin marked on one of the F-1201E oil tank side brackets. 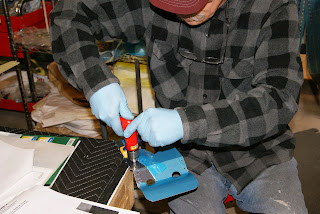 Drilling a small lead hole in a F-1201E oil tank side bracket.
After drilling out the lead holes in both F-1201E brackets to #30 per the service bulletin, the F-1201G-Mod rib is marked … a line is drawn on the rib’s flanges 1/4" in from the edge. The F-1201G-Mod rib is then set in place behind the F-1201E brackets and the line drawn on the rib is centered under the previously drilled holes and then the rib is match drilled. I found it easier to just mock up the whole assembly for drilling because it was just too hard to hold the parts in place … as it was the parts moved slightly when drilling the first hole,  but not enough to create an issue. 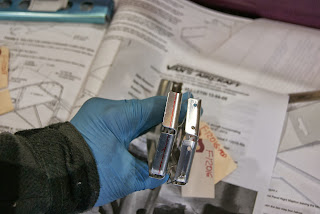 Drill line drawn on the flanges of the F-1201G-Mod rib on the left … the predrilled F-1201G rib is on the right for comparison. 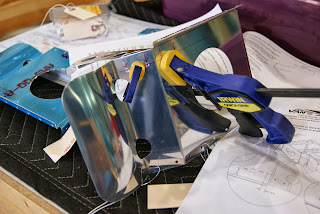 F-1201G-Mod rib clamped into position and ready to be match drilled. 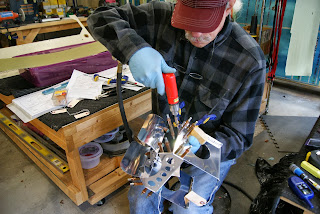 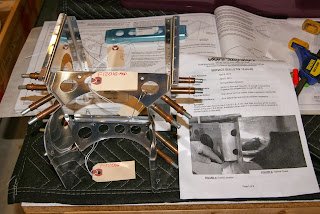 Completed match drilling of the F-1201G-Mod rib and compliance with the service bulletin when the parts are finally assembled.
Was hoping to sneak in a late afternoon quick primer session to finish off the parts worked on today and prime the stragglers from when I ran out of primer yesterday … but the monsoons set in and dashed any hopes of priming. There may be a small window of opportunity in the morning tomorrow if the temps cooperate. However there are more monsoons forecasted for tomorrow afternoon again.
Posted by John at 9:15 PM