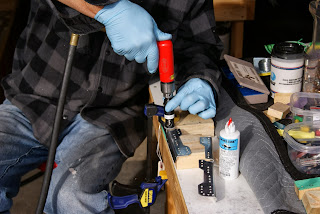 Using a #40-100 degree countersink bit in the countersink cage to countersink the nutplate rivet holes on one of the F-00026 instrument stack angles. 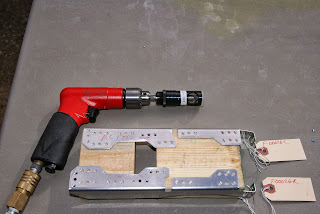 Both F-00026 stack angles after machine countersinking.
A few more items were also worked on prior to today’s JetFlex paint session. The F-1201Q-L&R battery angles were separated, deburred and required having the rivet holes for a sole nutplate on each angle to be countersunk per the plans. The F-1202D instrument panel attach strips were also separated and deburred. 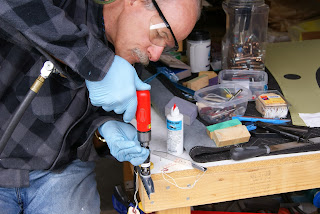 Machine countersinking nutplate rivet holes on one of the F-1201Q battery angles. 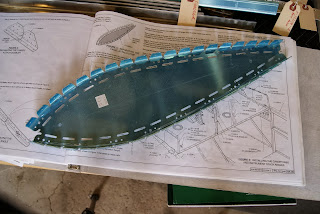 F-1202D instrument panel attach strips prior to being separated on the band saw and deburred with a Scotch-Brite wheel.
Yesterday the work session in the shop was short due to an unexpected trip to a metal shop. I was talking to Mike about the bent W-1237C seat back angles and wondered if Mike’s friend Steffon, who owns a metal fabrication shop, had a metal press outfitted for taking the bow out of angle stock. As luck would have it, Mike was going to Steffon’s metal shop in the afternoon and so I tagged along and brought the bent angles along in the hopes there would be a jig of some sort available to remove the bows in the material.
When Mike and I got to Steffon’s shop, I was told that the shop does not have the tool I was hoping to find there … the feeling of hope quickly turned to despair, thinking that I would have to take the time to build a jig to straighten the angles. Then Steffon said, “I usually use a metal bender for that type of thing, you are welcome to give it a try”. Ah hah! The feeling of despair quickly changed to a small glimmer of hope. Steffon lead us to a nifty power metal forming tool capable of forming metal stock into circles or any radius desired. After showing Mike and I where the forming wheels and shims were located, we were left alone …. man vs. machine. Setting up this machine was a little like working on a Chinese puzzle … the sides of the wheels have recesses of different depths so depending on which way the wheels are placed against one other on the same shaft, will create gaps for the angle to ride in. After a little trial and error Mike and I were able to configure all three wheels with the aid of some shims to accept the angle aluminum.
It became quickly apparent this tool would take no prisoners and would easily gobble up metal, clothing and fingers alike … and never so much as burp. We started out very conservative and feed the angle through the rollers one side at a time and slowly increased the amount of downward pressure applied by the center wheel until the angle was finally straight. The machine has digital readout so the settings were replicated on the other pieces once we knew where to stop.  Worked great!!! Thanks Steffon!!
The downside is the drive wheels have small groves on them and they left very small marks on the metal … fortunately, we worked the metal in small steps so the marks are not at all deep and should smooth out nicely should I decide I even want to bother making them go away. 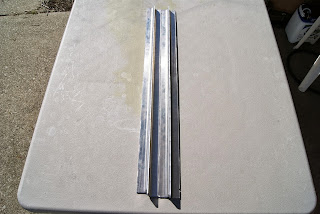 Straightened W-1237C seat back angles placed back to back … must say they look a whole lot better than the photo posted a couple of days ago. If the photo is zoomed in on, the small marks left by the drive wheels can be seen.
Today the morning was spent putting the finishing touches on the next small batch of parts ready for primer. The afternoon was spent spraying JetFlex onto the parts that were primed during the spray session earlier in the week. This time the DOG Aviation paint department had good results with the Jet Flex interior paint … the spray tip was cleaned often with a toothbrush dipped in water and ammonia solution. The tendency to splatter paint occasionally was, for the most part, eliminated by the frequent tip cleanings. The gun was never run dry and the cleaning solution was run into the gun immediately after painting was completed, so cleanup went well.
Was hoping to spray primer on the parts worked on earlier in the morning but by the time I was ready for that, it was getting too late to spray ... would have been doing cleanup well into the dark. Hopefully I can get the parts sprayed tomorrow afternoon. 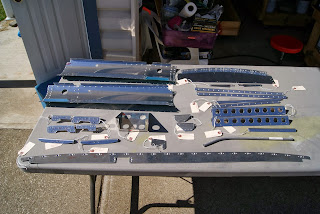 Next small batch of parts ready for primer.
Posted by John at 9:19 PM