Because of the discovery of the bulkhead that needs to be primed, decided to round up the remaining miscellaneous parts that need primer and just polish it all off since another batch of primer will need to be mixed up. There are just a few remaining small items left to prime and the large longerons.

Figured at this point, may as well knock out the longerons and get then primed along with the bulkhead and the four other small items yet to receive primer. However, before primer, the longerons will require quite a bit of attention. They need to be cut to length, flaired, bent, formed, twisted and beat into submission when necessary.

The plans give the builder dimensions for the placement markings used for determining the locations of flared ends & twists, the template positioning for the curves and placement of bends and cuts on the aft end of the longerons. The F-1234-L&R canopy decks are used as the templates for making the curve in the longerons. Normally the longerons would be placed in a vice, tensioned and whacked with a mallet to put a small curve into the angle … move another inch and repeat.  While bending the longerons for Pete’s RV9A using this method, we discovered it places a huge twist in the angle which then requires more bending on the opposite side of the angle to straighten out the twist … which also relaxes the curve. So it is a continuous two steps forward one step backwards time consuming process.

Wanting to try another method other than beating the longerons into submission, decided to buy a pair of longeron bending dies. The dies are sold by a guy who owns a machine shop and built a RV years back. He realized there had to be a better way and designed a pair of dies that are placed into a vice and when the jaws are closed it compressed the aluminum and forces it into a controlled bend. One half of the die is convex and the other is concave. The convex die also has a slot which holds the aluminum angle and helps eliminate the vast majority of the twisting. 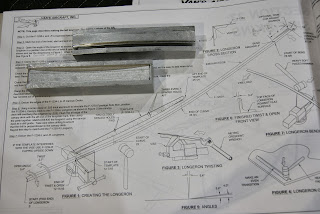 RV longeron bending dies … top die is convex with a slot for holding the angle which greatly minimizes the twisting ... bottom die is concave. The dies are placed in a vice sandwiching the aluminum angle and the bend forms as the vice’s jaws apply pressure.

I was not sure if my vice would be up to the task, so Saturday evening the longerons were taken to Bernie’s house and we used his much more industrial vice to do the work. The ends of the longeron’s were first opened per the plans but instead of beating the longerons, a ¾” pipe coupling was compressed in a vice which had the effect of flaring the angle of the aluminum. The pipe worked great. After the longerons were flared, the end of the longeron is twisted a few degrees with a “metric crescent wrench”. 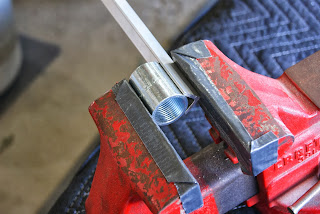 Example of using a pipe coupler in a vice to open the bend of the aluminum angle.

Now for the fun, the longeron bending dies were lubed with grease, longeron placed in the dies and then the dies were squeezed in a vice until the metal moved … the die was then moved a couple of inches and the process repeated. 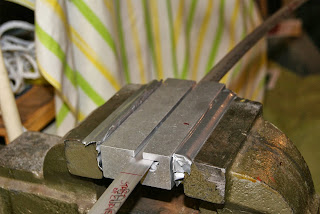 Longeron in the bending dies ready for the vice’s jaws to compress the dies to form a bit of a curve in the longeron. 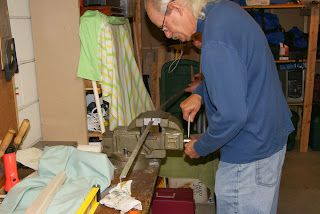 Compressing the bending dies with the vice to form the curve while Bernie is holding the aft portion of the longeron.

Once the curve was formed, the appropriate F-1234 template was aligned with locating marks previously marked on the longerons and the curve checked. The longerons were fine tuned by being beat into submission with small love taps. Of course, the hand pounding and fine tuning did put some twist into the metal, so it was still necessary to go back and forth as was done for Pete’s longerons … but the twisting was truly minimal in comparison. Have to say the dies made a very nice curve and did a great job … would recommend them to other RV builders of all models. 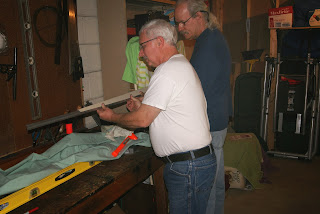 Bernie and myself holding the F-1234 canopy deck/template and comparing the curve of the longeron to the template.

With Bernies help, the longerons came out very nice and follow the template almost perfectly … doubt the curve is off by more than a 1/32” at any one point. 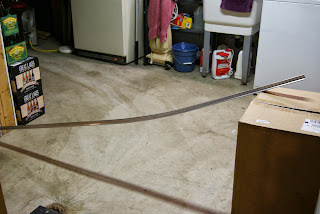 The two left and right longerons placed back to back after bending - yep they sure look even.