The F-1240 upper forward fuselage skin is a large flat skin that is slightly larger than the F-1202B instrument panel base. It becomes the curved top of the instrument panel and with the exception of the longerons, it's the last remaining large fuselage component requiring primer. After deburring the F-1240 skin, the plans have the builder run a #19 drill through all the large holes along the forward edge and both sides. After final drilling the holes to #19, the holes are then dimpled for a #8 screw. The #40 holes along the entire aft edge of the W-1240 also require attention in the form of dimpling for the solid rivets that will be used to install the panel. 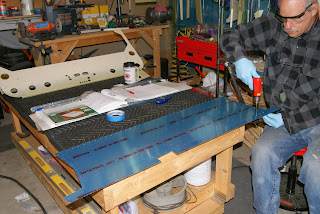 Drilling out the large holes along the sides and forward edge of the F-1240 upper forward fuselage skin using a #19 drill bit per the plans. 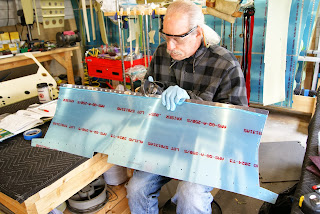 Dimpling the #40 holes along the aft edge of the W-1240 for flush solid rivets per the plans. 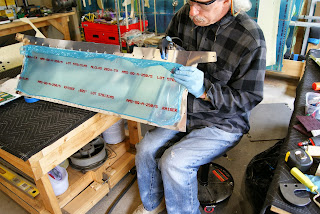 Dimpling the previously drilled #19 holes using the pneumatic squeezer outfitted with #8 dimple dies.
While waiting for the outside temperatures to warm up, a couple of other small parts were also prepped for primer. The day’s high was forecasted to be in the 70’s but don’t think it got much past 63 degrees. As early afternoon rolled around and the temps were still in the low 60’s, figured it was as warm as it was going to get for the day so proceeded to spray JetFlex onto the parts that were primed Sunday. Cleaned the gun and changed the tip back to 1.4mm and mixed up a small batch of Akzo primer to attempt finishing off the parts left over from the last spray session plus the new ones recently readied for primer.
I was able to finish off both the F-1240 skin and F-1202B instrument base, along with all the parts left over from the last primer session … however, ran out of primer once again just a few small parts short of being finished. Oh well, I can always mix up a small batch of primer and use the airbrush or just continue prepping the remaining stragglers and have another small pile to prime with the large gun.
A cold front is headed our way and it appears the 60 degree weather will be departing later in the week (possibly for good) so hoping to get in at least one more spray session.
Posted by John at 8:22 PM