Yesterday’s work session in the shop was brief, but forward progress was made on the RV-12’s fuselage. Early on, a tight fit blind riveting hand tool which takes the place of the AEX wedge was purchased … its initial attempted use was met with little success because of clearance issues at the time … so the tool was thrown back in the tool caddy and more or less forgotten about. While looking in the tool caddy for the ¼” reamer the other day, I ran across the tight fit riveting tool and decided to give it a try once again. 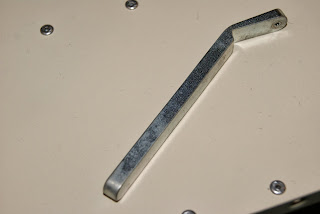 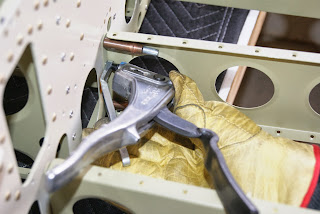 Tight spot riveting aid in place on a rivet with the rivet puller in position. 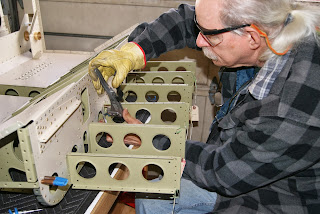 With the aid of the tight spot tool, a pop rivet is being set which will permanently attach the F-1212 step rib onto the F-1203A bulkhead assembly. 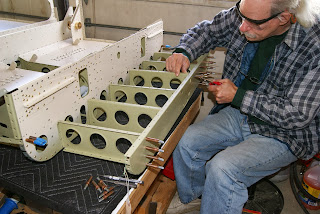 Securing the F-1202A bulkhead onto the forward flanges of the F-1212 step ribs with Clecos.

The solution is easy, just place the bushings in a vice or clamps and compress the fingers inward and file a some material off. It is not necessary to remove everything just enough to let the fuel line move in the bushing with a little drag. 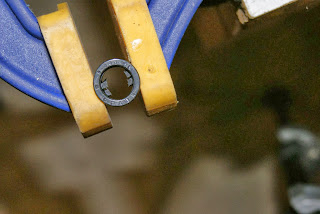 Photo of the Heyco SB-500-6 snap bushing prior to filing the fingers down. 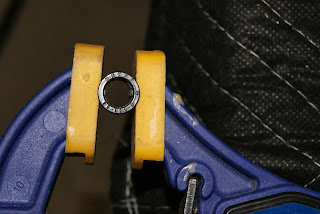 Photo of the Heyco SB-500-6 snap bushing after filing the fingers down a little.

Filing the two bushings down worked great … after locking the bushings in place, the small piece of fuel line was placed into the bushing’s hole and although there is still a little drag, the fuel line was easily slid fore and aft. This will make the fuel line instillation go much faster to be sure. After the fuel line bushing issue was sorted out, the remaining assortment of various sized bushings were installed per the instructions.
Posted by John at 9:14 AM