Today was one of those days where nothing went as planned … a late start in the shop coupled with one step forward, two steps back progress all afternoon equated to not much progress.

Yesterday, the forward lower fuselage assembly was secured with Clecos and ready for riveting … or so it was thought. Today, that all changed. For some reason, felt hesitant about riveting the parts together … something didn’t feel right. The plans were looked at a couple of times and finally discovered the small issue that was subconsciously bothering me. There are two tabs of metal that will be riveted onto the bottom of the firewall for the cowling to attach onto. The plans call for AN470 (domed heads) rivets … I want the rivets to be flush, so want to use AN426 (flat head) rivets. So the rivet holes in all the parts at those locations needed dimpling … and the dimples needed to be 100 degrees and not the 120 degrees used for the flush pop rivets. 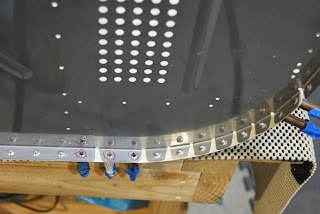 The three holes marked in red are riveted later (same applies to the right side) when the cowling mounts are installed … but since I’m going with flush solid rivets here, they were dimpled with a #30 100 degree dimple dies. Looking closely at the photo one can see the difference in the angle compared to adjacent 120 degree dimples.

All the Clecos holding the whole assembly together needed to be removed so the six rivet holes in all the parts could be dimpled to the correct angle for the solid flush rivets. After dimpling the six holes and reassembling the parts with Clecos, it was discovered the blue film was left on along the rivet lines. So once again the fuselage side skins were removed from the assembly and a soldering was used to remove the blue film from long the rivet lines. The parts were Clecoed back together … but then discovered I forgot to deburr  the edges where the blue film was removed  … so the Clecos were removed YET AGAIN and the edges were smoothed with one of the foam 3M sanding blocks. Note: When parts are deburred with the 3M ScotchBrite wheel and the blue protective film is left on during deburring, the part will tend to get a rough edge adjacent to the blue film. After the film is pealed away, a quick swipe or two with the 3M foam sanding pad smoothes the part quickly. 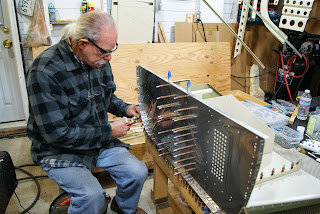 Placing Clecos in the F-1271-R fuselage corner skin for the third time today! 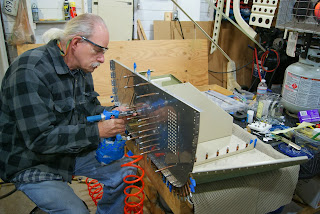 Using the pneumatic rivet puller to rivet the F-1201C firewall onto the F-1217A-R tunnel rib. 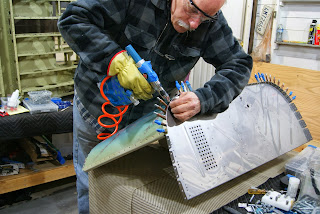 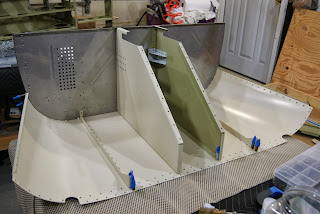