A fair amount was accomplished yesterday beginning with riveting the F1288 cooler stiffener onto the F-1201C firewall. Access was good for the pneumatic squeezer so the stiffener and three associated nutplates were riveted in place using solid rivets as opposed to pop rivets. 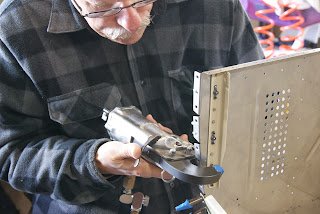 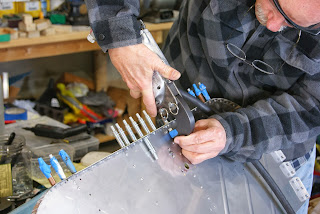 Using the pneumatic squeezer to attach nutplates onto the forward flange of the F-1201C firewall. 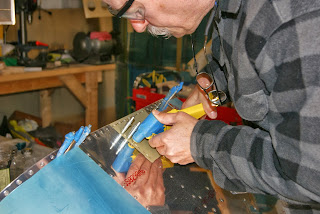 After all the nutplates were riveted in place, the F-12118 cowl attach plates and F-1201U spacers were match drilled to the forward flange of the F-1201C firewall. Before drilling, a centerline is drawn on the spacers so they can be centered on the holes in the F-1201C firewall’s forward flange. The F-1201U spacers are then sandwiched between the firewall’s flanges and the W-12118 cowl attach plates. The assembly was match drilled, deburred, dimpled and then riveted onto the firewall’s forward flange. AN426 flush solid rivets were used in place of the AN470 dome headed rivets normally used here. After riveting is completed, two nutplates are attached to both cowl mounting tabs. 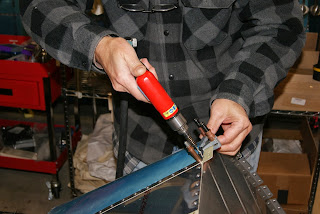 Match drilling the F-12118 cowl attach plates and F-1201U spacers (hidden) to the existing rivet holes on the forward flange of the F-1201C firewall. 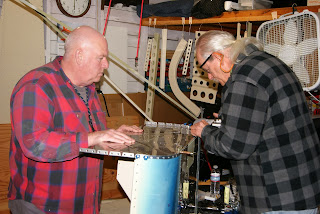 Mike helping to hold the forward lower fuselage assembly while I use the pneumatic squeezer to set AN426AD4 flush solid rivets into the F-12118 cowl attach plates. This location would normally be receiving a dome headed AN470AD4 rivet. 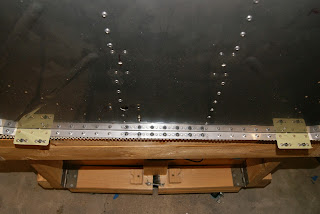 Nutplates and F-12118 cowl attach plates riveted in place on the forward flange of the F-1201C firewall.

Next, preparations began on the F-1201B firewall shelf so it can be added to the forward lower fuselage assembly. The shelf was deburred then dimpled for nutplates. The F-1201B shelf receives four F-1257 rudder pedal support channels and a ten nutplates of assorted sizes. 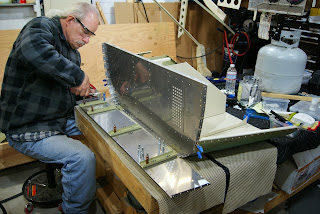 Securing the F-1257 support channels onto the F-1201B firewall shelf with Clecos. 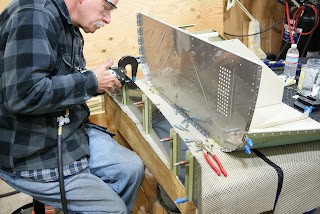 Riveting one of the various sized nutplates onto the F-1201B shelf with the pneumatic squeezer.

The finished firewall shelf assembly requires a coating of Pro-Seal just prior to riveting. The Pro-Seal is used to make a permanent seal on the firewall parts and creates a seal between the engine compartment and cockpit. Figured that was a good stoping point for this shop session. 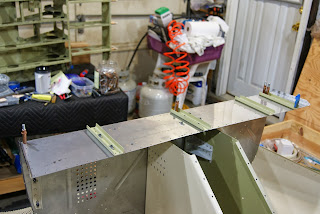 Finished F-1201B shelf assembly ready for Pro-Seal and riveting onto the forward lower fuselage assembly.
Posted by John at 6:46 AM