Due to Hoiday preparations and getting the snow blower ready for the season’s first major snow storm, the last couple of work sessions in the DOG Aviation production facility have been abbreviated. The riveting of the RV-12’s F-1276 fuselage bottom skin continued as planned. All the rivet holes aligned nicely … so apparently having the fuselage on its side as opposed to being upside down on saw horses did not create any adverse issues. 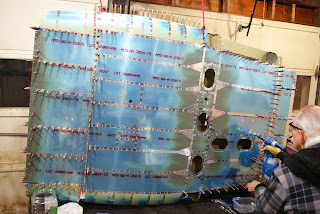 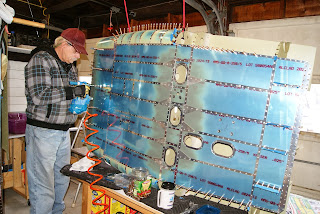 Setting a flush pop rivet into the F-1276 fuselage bottom skin with the pneumatic rivet puller … only a few more rivets to set and the bottom skin riveting will be completed.

To casual observers of the Blog, the following two photos may look like ones posted last week … and they are, but now the fuselage assembly has a bottom skin attached. 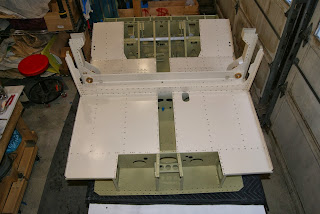 Aft view of the fuselage assembly with bottom skin riveted in place. 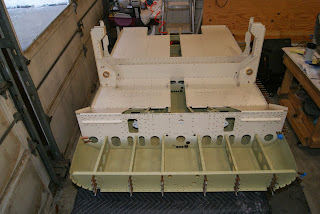 Forward view of the fuselage assembly with newly attached bottom skin riveted in place.
Posted by John at 6:56 PM