Yesterday was another productive day in the shop and coupled with a few minutes this morning setting rivets in a few nutplates, the Eagle now has two perches.

The F-1225L&R seat floors required some attention prior to attaching them onto the F-1215 seat ribs. The previously prepared and painted F-1237E seat back hinges were riveted onto both F-1225L&R seat floors followed by the attachment of a few nutplates on each of the seat floors. As mentioned in a post very early on in the project, every nutplate installed has a screw lubricated with paste Boelube run into the threads to make sure the nutplate is not excessively tight. This is probably total overkill … but when helping Pete with the assembly his RV-9A (which he just loves flying), there were some excessively tight nutplates that were chewing up the threads on the screws, so I feel it is good insurance even though it takes a few extra minutes. 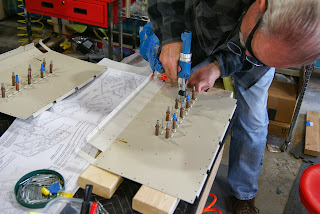 Riveting the F-1237E seat back hinges onto the F-1225R seat floor with the pneumatic rivet puller.
Return from the future - fellow builders beware, in the haste to beat the weather and prep as many parts as possible as quickly as possible a big time error was made with the F-1237E seat back hinges. The two center eyelets on all four of the E-1237E seat hinges require removal. On page 21-06 step 8 it says to make the hinge but does not mention to remove the two center eyelets … however, the figure step 8 refers to does say to remove the eyelets. Missed that altogether ... darn! Fellow builders looking at photos of my RV-12 build for reference please take note: The F-1237E seat hinges shown in photos posted between now and August 24, 2014 will be incorrect in that they show the two center eyelets in place on all the F-1237 seat hinges. 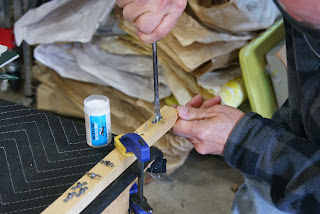 A nutplate set in a jig having a screw lubed with paste Boelube run into it to check the tightness of the nutplate. 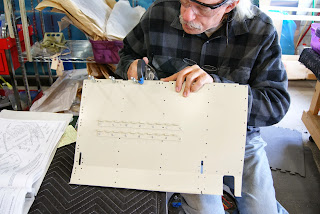 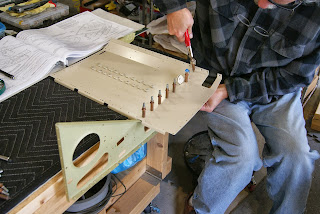 Securing the remaining F-1215L seat rib assembly with the seat belt lug onto the F-1225L seat floor with Clecos. 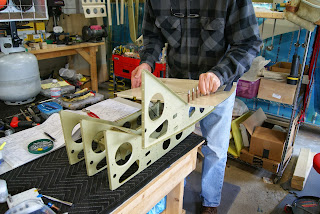 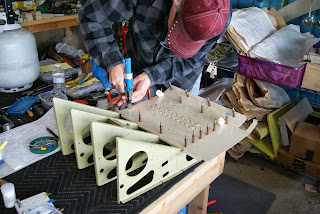 Once the F-1225L seat floor is riveted in place onto the flaperon mixer bracket/seat rib assembly, there were a few nutplates to install on the assembly and a small strip of metal called the F-1253 seat floor support to rivet onto the outer edge of the seat floor assembly. This marks a momentous occasion … as it’s the making of the Eagle’s pilot perch. 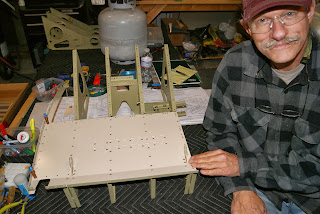 Doesn’t look like much yet, but this left floor and rib assembly will be the base of the perch to view the world from high above. 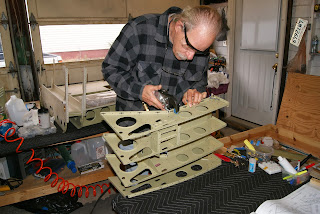 Attaching nutplates along the edge of the F-1225 right seat floor assembly with the pneumatic squeezer. 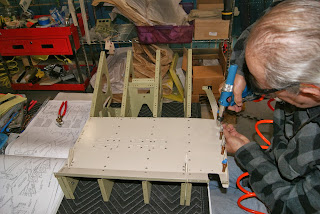 Riveting the F-1253R seat floor support onto the right seat floor assembly with the pneumatic rivet puller. Note the two Clecos with blue tape denote do not rivet holes .. these holes are riveted later to bulkheads … the same was done on the left seat assembly. 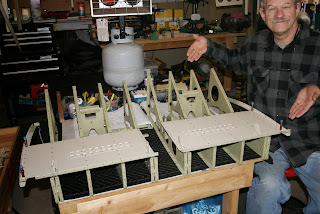 The completed left and right perches look a little Spartan at the moment but will eventually be the support for a hopefully cushy seat.

With the completion of the left and right seat floor assemblies, the fuselage is about to get big quickly. The next step in the instructions has the builder mate the two assemblies onto the center section. Sounds like fun … not. Think there will be a lot of close quarters riveting on the horizon.
Posted by John at 7:49 AM