Yesterday, while waiting for a replacement W-1210-PC control column, work on section 22 forward lower fuselage components continued. Many weeks ago, when deburring parts for primer, the stainless steel firewall items were passed over because of the time constraint for favorable painting weather. As a result, quite a bit of time was spent deburring and smoothing the razor blade like edges on the stainless steel F-1201C firewall bottom. Once all the edges no longer qualified as being a Gillette or Wilkinson Sword product, the flanges on the F-1201C that will receive the flush rivets being used on the RV-12 project were dimpled with the pneumatic squeezer. 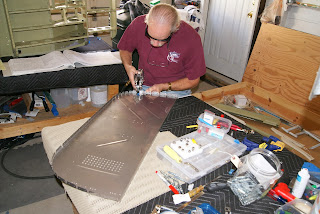 Using the pneumatic squeezer to dimple flanges on the F-1201C firewall bottom to accept the flush rivets being used on the RV-12 project in place of LP4-3 pop rivets.

Both F-1217A tunnel ribs have a powder coated F-1204 engine mount attached to them with Clecos and all the mounting holes are then match drilled to #30 … basically removing the powder coating from inside the rivet holes. The parts were then deburred, reassembled and the F-1204 engine mounts were riveted in place on the F-1217A tunnel ribs. This is one location I would have loved to have riveted with solid rivets but the makeup of the part is such, that was not going to happen. Think only three of the eighteen rivets on each mount could be riveted with the pneumatic squeezer ... seemingly not enough to make it worthwhile. 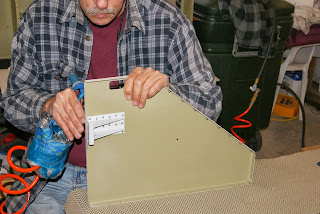 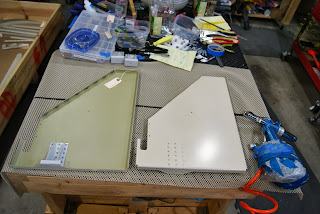 Next the F-1217A tunnel ribs were clecoed to the F-1272 fuselage forward skin and that whole assembly was clecoed onto the F1201C firewall bottom. At that point, I jumped ahead a few steps and performed the required match drilling on the previously made F-1201L bracket for the gascolator. Figured it was a little easier to do it now than later on because drill access is tight into the tunnel rib … and would be very tight if the corner skins were installed had I followed the plans. In fact, even with the improved access, this is a location where a 12” drill bit was needed to get the job done correctly. Unfortunately, the head on my 90 degree drill attachment was too large to allow the drill bit to enter the hole straight on. When the match drilling was completed, the parts were disassembled for deburring. 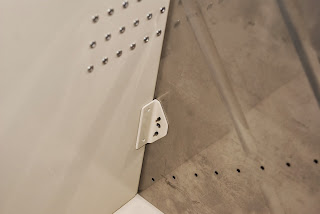 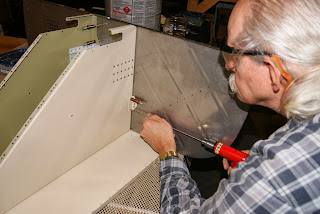 Upon disassembly for deburring … I took the opportunity to skip ahead in the plans yet again and installed the three nutplates in the vicinity of the gascolator onto the F-1201C firewall. I did this because I used a rivet gun to back rivet the nutplates in place rather than use the tiny pop rivets Van’s supplies ... which do not appear to leave a lot of meat on the nutplates once the rivet's mandrel pulls straighr through the rivet. (No popping with these small rivets). I know, the shame of it all not being a pop rivet purest. But I can tell you with certainty these nutplates will NEVER loosen up. Since I have the tools, why not make the finished product better if possible? Admittedly, the first rivet set was less than perfect because the rivet gun’s back riveting attachment was new to me … but was still quite acceptable for a nutplate. 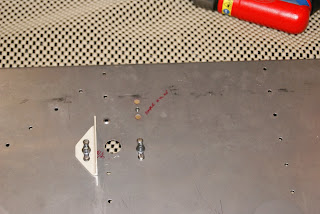 All six rivets for the three nutplates were back riveted using a rivet gun and back riveting plate.

The W-1217A-L&R tunnel ribs were once again attached onto the F-1272 forward fuselage floor and riveted … except for the aft most rivet hole on each tunnel rib. That assembly was then mated onto the F-1201C firewall bottom and secured with Clecos. 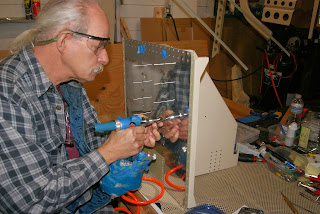 Before further riveting, the F-1271-L&R corner skins are added to the assembly and secured in place with Clecos. At this point, called it quits and will rivet up all the parts during the next session in the shop. 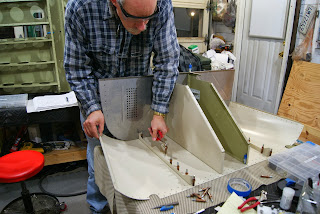 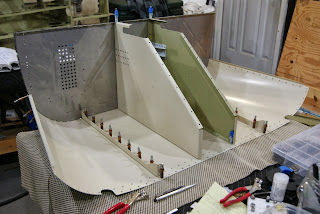 Clecos securing lower fuselage assembly components in place for riveting during the next shop session.
Posted by John at 8:30 AM