Moving On To Section 22

Unfortunately until the WS-1210 control column replacement can be obtained, work can’t continue on section 21 of the plans. Paging further forward realized some work can be accomplished on assembling some components in section 22.

Mike came over and after we put the finishing touches on a project for him, Mike suggested we work a little on the RV-12. So we jumped ahead in the plans to Section 22 which does not involve working with the fuselage components assembled thus far. Section 22 begins with assembling the forward lower fuselage components that will be mated with the fuselage assembly later. The plans call for riveting 16 nutplates onto the sloping edges of the F-1217A-L&R tunnel ribs. We prepped the nutplates, then Clecoed them in position on the sloping flange of the tunnel ribs. After a quick training session on use of the pneumatic squeezer, Mike riveted the nutplates in position onto the F-1217A-L&R tunnel ribs. 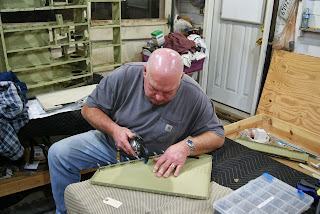 Mike using the pneumatic squeezer to rivet nutplates onto the F-1217A-R tunnel rib.

It ended up being a short work session. After the tunnel rib nutplates were riveted in place, there were tornado warnings … so though it best to get into the house just in case it was necessary to ride it out in the basement.
Posted by John at 6:38 PM