Today’s work session began by finishing up the riveting of the F-1215 seat rib that had the autopilot servo’s doubler plate added to the flaperon mixer arm assembly. Once that was completed, work continued by way of the F-1267A&B crotch strap (that name makes a guy cringe a little) brackets. The brackets were prepared for riveting by first installing two nutplates on each of the four pieces.  The pneumatic rivet squeezer and a standard yoke is good for the F-1267A parts, but the angle on the F-1267B pieces makes it very hard to rivet using standard yokes with rivet sets, so Van’s has the builder use #40 flush pop rivets. However, the DOG Aviation facility was able to rivet the F-1267B pieces by using a no-hole yoke on the squeezer to set AN426AD3-3.5 rivets in lieu of the #40 pop rivets. 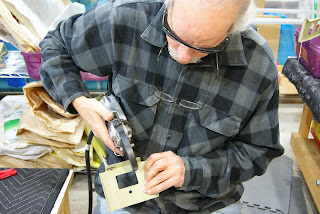 Riveting plate nuts onto a F-1267A crotch strap bracket with the pneumatic squeezer. 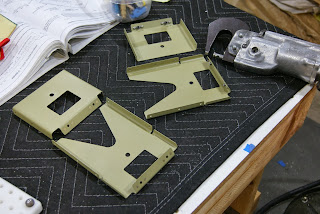 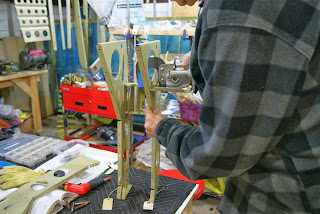 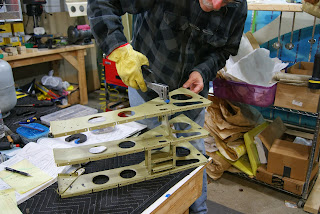 Sandwiching the crotch strap brackets with an F-1215 seat rib … two LP4-3 pop rivets were used where the squeezer could not reach, the remaining ten rivets were squeezed. 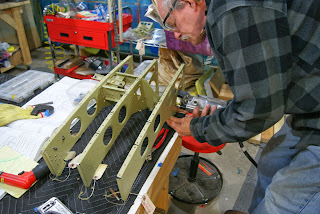 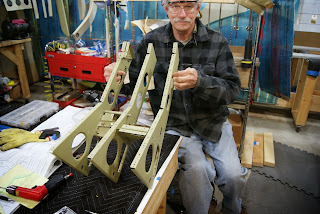 Making progress … the makings of a place to sit in the RV-12. 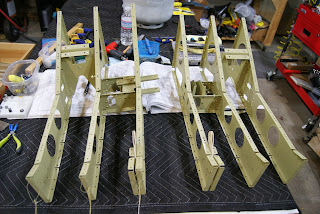 Completed pulley and flaperon mixer arm assemblies that will soon become the bases for the RV-12’s left and right seats.
Posted by John at 9:00 PM