Before attempting to move onto the next step in the instructions, a detour is in order. Following another builder’s tip from the RV-12 Forums, this is a good time to make a quick diversion to section 28-06 step 1 and install a bulkhead fuel fitting. Apparently, trying to accomplish this task once the bottom skin is on the fuselage makes what would be a simple task a real pain in the back.

The fuselage assembly was once again rolled onto its side and the parts were located. The AN-837-4D bulkhead fuel fitting is inserted from the aft side of the F-1204D center section aft bulkhead and two washers and an AN924-4D nut secure the fitting against the forward side of theF-1204D bulkhead. The big issue is the washers are rather large in diameter and the first washer that mates with the F-1204D center section aft bulkhead interferes with the bulkhead’s web to flange transition. As such, the plans instruct the builder to grind off a portion of the washer to offer relief in that area. After the photo below was taken a small amount of material was also removed from the second washer as well. 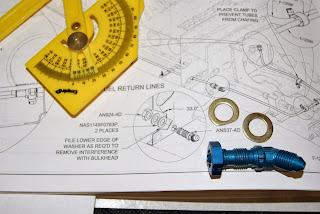 Another item that needs to be worried about is the angle at which the bulkhead fuel fitting is installed … it needs to be canted at 33 degrees towards the left side of the aircraft. The protractor was set to 33 degrees and a mark was made on the top of the fitting for correct placement on the F-1204D bulkhead. 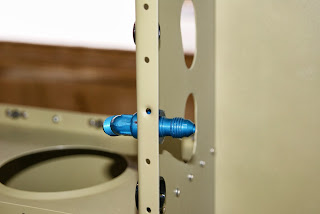 Flipping back to the plans to continue the fuselage construction where I had left off, I quickly realized that further assembly of RV-12 parts would need to be halted until the WD-1210-PC control column’s hole alignment issue mentioned 11/12/2013 gets resolved. This is because the very next step is installing side skins that will cover the opening that the WD-1210 is inserted through … and soon after that, the bottom skin. So for the time being the project is halted. There are a few things I can do such as dimple nutplates and possibly install them here and there. But as far as major construction goes, looks like the project will be on hold until at least Thanksgiving. That sucks!

Yesterday, Mike and Bernie were over visiting and they both noticed something about the WD-1210-PC control column’s mounting hole alignment issue (mention in the Blog on 11/12/2013) I had not noticed. It would appear that one of the tabs welded onto the assembly is longer than the other and because the tabs are predrilled prior to welding, the extra length makes the holes uneven. Below is a photo taken with a straight edge placed up against the tabs as a reference … easy to see the difference in length. 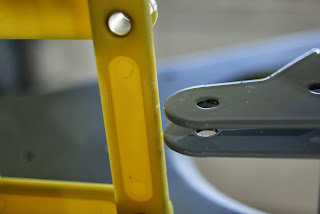 Photo of the tabs on the WD-1210-PC control column the difference in length can easily be seen.
Posted by John at 2:12 PM