First thing on the agenda was completing the mating of the left seat bottom/flaperon bracket assembly onto the RV-12’s fuselage center section. The same procedure was used as was used yesterday to attach the right seat assembly. The center section was flipped over and the left seat bottom/flaperon bracket assembly was secured with Clecos and finally riveted in place. 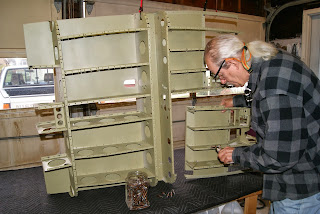 Placing the left seat bottom/flaperon mixer bracket assembly in position for attachment to the fuselage’s center section with Clecos. 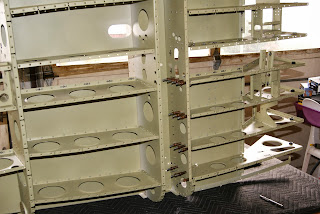 Once the left seat bottom/flaperon mixer bracket assembly was in position, the aft flange of the F-1225L seat floor was riveted onto the center section’s forward bulkhead using the pneumatic rivet puller and the close quarter hand rivet puller. The F-1215 seat ribs were next to rivet and, as with the right seat bottom/pulley bracket assembly, the manufactured heads of the rivets were placed on the flanges of the F-1215 seat ribs. The seat ribs are made of thinner material than the center section’s forward bulkhead, so the manufactured head will be placed on the thinner material. The only exception was the top rivet … because of the slope of the floor, it had to be riveted from the bulkhead side of the center section. 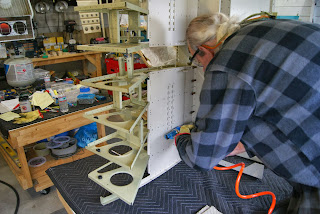 Riveting the aft flange of the F-1225 seat floors to the center section with the pneumatic rivet puller. 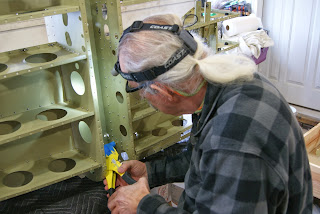 Using the swivel head rivet puller to set the upper rivet of the F-1215 seat ribs from the bulkhead side. 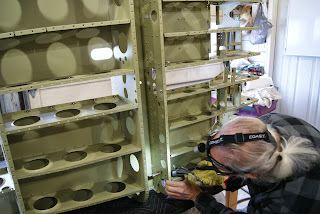 Riveting the last rib with the close quarter hand rivet puller and soon to be “man eater”.

A blood, sweat and no tears, but colorful language moment …..  first I digress.  Very early on in the RV-12 project I learned respect for the close quarter hand riveting tool. The tool’s handle stop is positioned in such a way it is very easy to catch the meat of your hand in it. I got lightly pinched by the tool early on and from that point forward, have typically worn a leather glove on the hand squeezing the handles. Today was no exception, however this time I was reaching over the tool with my other hand to hold the nose of the tool so it does not scratch paint when the rivet pops. Well, you can guess what happened just after the above photo was taken … there was one of those blood, sweat and colorful language moments. 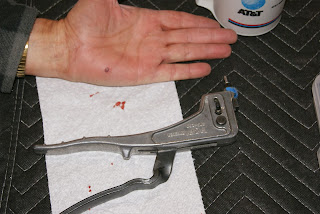 The close quarter riveting tool is also … “a man eater” and creator of flesh wounds.

To quote Monty Python “it’s just a flesh wound”. As such, work resumed and the last few rivets were painfully set to finish off the riveting of the left seat bottom/flaperon mixer bracket assembly onto the fuselage’s center section. This also created one large assembly that will continue to grow in the coming days. 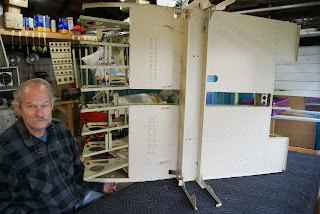 The next order of business was to attach the F-1204CL-L&R Forward bulkhead side assemblies onto the F-1224-L&R seat floors. Once the side assemblies were riveted in place, the F-1204H bulkhead caps which tie the two bulkheads together were riveted in place. The aft upper three holes of both F-1204 caps are not riveted at this time … the same applies to the second hole up from the bottom on the forward flange of both F-1204H caps. Access was good for the pneumatic squeezer, so the decision was made to rivet the forward flanges of the F-1204H caps using AN470AD4-4.5 rivets as opposed to LP4-3 pop rivets. I like the look of solid rivets and decided to go for it because the rivets can be seen from the forward cockpit. The aft side of the F-1204H caps were riveted with pop rivets. 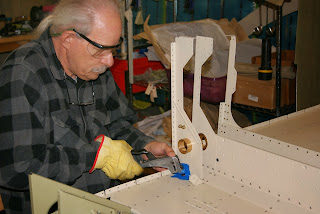 Riveting the F-1204CL-R forward bulkhead side assembly to the F-1224R seat floor with the “man eater”. 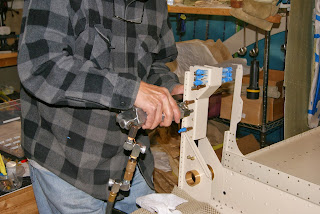 Using the pneumatic squeezer to rivet the F-1204H bulkhead cap onto the F-1204CL-R forward bulkhead side assembly using AN470AD4-4.5 rivets in place of LP4-3 pop rivets. 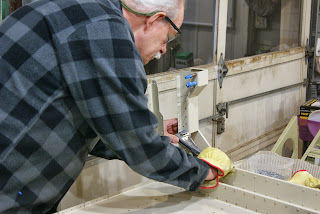 Squeezing the “man eater” to set a LP4-3 into the aft flanges of the F-1204H bulkhead cap. Note the upper three holes are not riveted at this time. 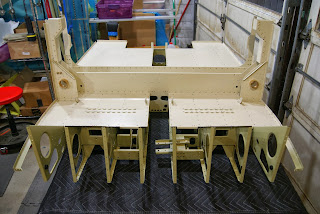