Yesterday was a Pro-Seal day. Those of you in the know are familiar with the ramifications of that statement. Fortunately, having helped Pete work with Pro-Seal on his RV9A proved very useful … in that, I knew what to expect and how to make the process go smoother. For those of you not familiar with Pro-Seal, the product is used to seal fuel tanks and is used on aircraft much the same as silicone would be used to fill gaps or make a gasket. It is an epoxy type of product that has a catalyst agent mixed into it to set off the curing process. Pro-Seal is thick … gooey … goopy … sticky … stringy … and tenacious. Get one drop of it on your gloves and it will quickly spread to every tool you touch in the immediate work area. Get it on your clothes and it will be there ten years later. Paper towels shred when trying to wipe it up … suggest shop towels or rags for easier cleanup.

Sadly, I did not take any photos of using Pro-Seal … frankly, I did not want my camera in the same room with it. I’m making it sound far worse than it really is … but the point is, Pro-Seal is messy, very messy. But if you want to make a flexible seal on an aircraft, there is no better product than Pro-Seal … and unlike silicone, it is paintable.

Mike had the morning free and offered to lend assistance, so before the Pro-Seal was mixed, we cleared off the work area, got tools ready and laid down paper to protect adjacent surfaces. Mike scuffed the upper flange of the F-1201C firewall and the bottom of the F-1201B firewall shelf with a Scotch-Brite pad and cleaned the parts with Acetone. The Pro-Seal was then mixed and a thin layer was spread on the upper flange of the F-1201C firewall and the bottom edge of the F-1201B firewall shelf that will be riveted onto the F-1201C bottom firewall. After the spreading of a thin coat on both surfaces was completed, the pieces were mated and secured with Clecos. The Pro-Seal coated parts were then riveted together. There are two rivet holes which need to be left open at this time which can be seen in the photo below with blue tape on the Clecos closest to me. 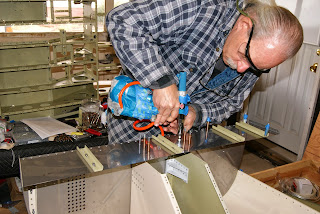 After the Pro-Seal cleanup, the finishing touches to the F-1201B firewall shelf consisted of riveting it onto the top flanges of the F-1217A tunnel ribs. The two Clecos with blue tape closest to me are to be left open for the oil tank mounting bracket - later in the build.

Once the F-1201B&C firewall parts were riveted together and the Pro-Seal cleaned up, the FF-1204D firewall stiffener was Clecoed in place and riveted onto the right side of the F-1201C firewall. 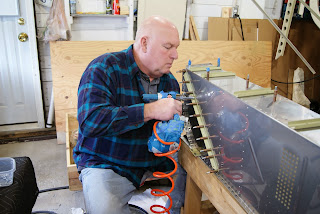 Mike using the pneumatic rivet puller to install the FF-1204D firewall stiffener onto the F-1201C firewall.

The last item in section 22 that could be worked on at this point in time is the VA-188 Flo-Scan mounting bracket. This is a bracket that will hold a device that measures the RV-12’s fuel flow and reports the results to the Skyview for display on the screen. The mounting plate has two sets of nutplate mounting holes … the model of the Flo-Scan shipped with the kit dictates which pair of holes will receive the nutplates. 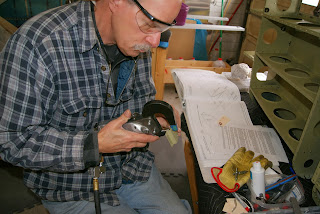 Because the VA-188 Flo-Scan bracket installs onto the bottom of the fuselage, the bracket was dimpled earlier prior to priming for the flush rivets being used on the RV-12 project. The VA-188 bracket was secured in place with Clecos and then riveted with flush 120 degree pop rivets in place of LP4-3 pop rivets. 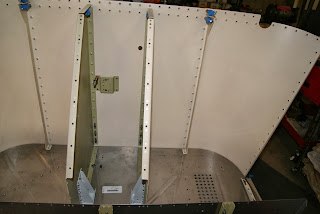 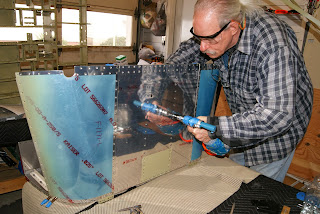 The next instruction in section 22 of the plans instructs the builder to mate the forward firewall assembly with the main fuselage assembly which can’t be done at this point in time because of the assembly diversion created by the WD-1210-PC’s miss aligned holes and subsequent wait for the replacement part. 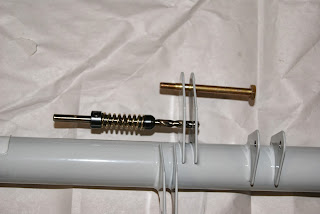 Compared to the photo posted last week, the holes in this WD-1210-PC control column are aligned much more to my satisfaction.

The WD-1210-PC control column was fished into position and secured with the AN3 mounting hardware. Rather than fight gravity, I left the fuselage assembly on its side and the inner washers that go between the mounting tabs on the control column and the bearing were a piece of cake to install that way. Took 7 minutes tops to install the hardware … never dropped a single washer.  Builders usually have quite a fight installing the washers. 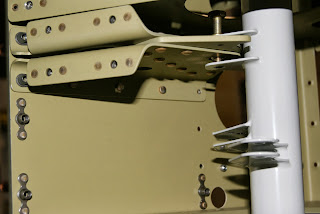 WD-1210-PC control column in position and ready for the instillation of four washers - two spacer washers to be placed above and two below the control mount bearing. Having the fuselage in its side made this task a piece of cake.

The typical torque range for AN3 hardware is 20 to 25 inch pounds. However, if the nut is a platenut or stop nut they offer a resistance which must be compensated for to acheive the desired torque. The nylon stop nuts used offered approximately 7 inch pounds of resistance. I desired a final mid range torque value of 23 inch pounds so set the torque wrench to 30 inch pounds and tightened the hardware until the torque wrench clicked. After the torquing of the mounting hardware was completed, yellow torque seal was placed onto the nuts to aid in spotting movement during subsequent inspections. 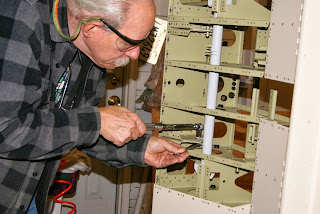 Using a torque wrench to tighten the AN3 mounting hardware to 30 inch pounds … 23 lbs desired plus 7 lbs for the internal resistance of the stop nut. 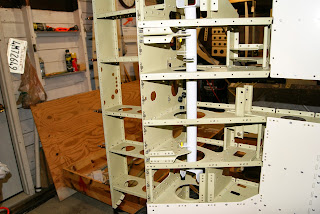 Now that the WD-1210-PC control column installation has been completed, work can now resume on completing section 21 of the plans.