Horizontal space in the shop is at a premium … so to facilitate the removal of the blue protective film from the bottom skin’s rivet lines, the bottom skin was temporally hung from the fuselage while it was on its side. 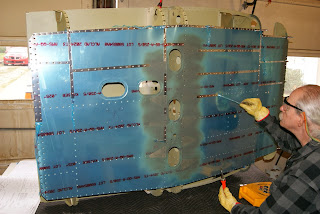 Removing the blue film from the rivet lines on the F-1276 fuselage bottom skin.

There are six corner skins per side which require being riveted onto the fuselage prior to installing the bottom skin. Van’s suggests the builder turn the fuselage upside down on a pair of saw horses to install the side skins and fuselage bottom skin. Frankly, there is no room in the shop for two saw horses and the temps outside are in the high teens, so moving the fuselage outside is NOT happening.

Because the fuselage seemingly balances fairly well on its side, decided to move forward and see if the riveting of the corner skins and bottom skin could be done while the fuselage was on its side. After all, the holes are all predrilled … and now dimpled, so the parts will either align well … or not. Mike suggested a contingency plan that seemingly would work well too. Mike’s suggestion was placing four 5 gallon buckets on the workbench, cover them with padding or towels and turn the fuselage upside down and rest it on the buckets if need be. Being fearful of the possibility of marring the interior paint … ultimately opted to first try keeping the fuselage on its side and see if that would work.

The twelve F-1275 corner skins are lettered A thru F and come in both a left and right version. The corner skins create the transition between the side skins and the fuselage’s bottom skin.  After being secured with Clecos the corner skins are only riveted to each other, the F-1204P and F-1203B attach flanges. The edges where the bottom skin and side skin attach are not riveted at this time. 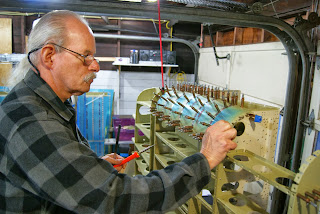 Right side’s F-1275A-F corner skins Clecoed and ready to be riveted to one another. Doing a last minute blue film removal from the F-1275A corner skin’s rivet line. 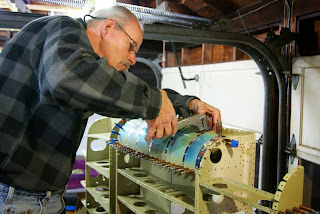 Riveting the fuselage’s right side F-1275A-F corner skins to one another.

After the fuselage’s right corner skins were riveted onto each other, the fuselage assembly was turned around and placed on its opposite side so the left side’s F-1275A-F corner skins could be installed in similar fashion. 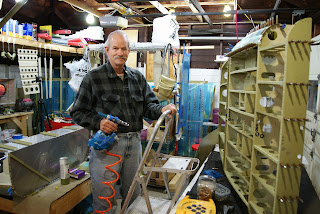 Just finished with the riveting of the left side F-1275A-F corner skins to one another. Mike’s small platform ladder proved to be a great help performing this task.

Before attempting to mate the F-1276 fuselage bottom skin onto the fuselage’s skeleton, the edges of the bottom skin adjacent to where the blue film was removed were smoothed with a few strokes of a 3M foam sanding pad. While I was dimpling the 40 nutplate rivet holes around the five inspection ports with the pneumatic squeezer, Mike jumped in and tested and dimpled the 20 K1000-08 nutplates that needed to be riveted onto the inspection ports on the bottom skin. The 20 nutplates were then riveted in place onto the F-1276 bottom skin.

The bottom skin was now ready for mating with the fuselage’s skeleton. An initial worry about obtaining proper rivet hole alignment because the fuselage was on its side quickly faded after a hand full of Clecos were installed at strategic locations and the fuselage skeleton began aligning perfectly with the rivet holes in the bottom skin. 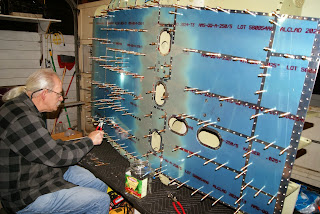 Placing Clecos into the F-1276 fuselage bottom skin securing it onto the fuselage’s skeleton for final riveting.

A nail set was used to ensure good alignment … the taper is such that with the skin and ribs being dimpled, if the nail set was held centered in a rivet hole, the adjacent rivet hole was almost assuredly aligned for Cleco placement.