The temperatures cooperated today and it was warm enough in the hangar to mix up a small batch of epoxy and slather a heavy coat onto the fiberglass canopy fairing lay-up per the plans. Because there were a few small spots along the tape line that had tiny gaps, decided to dye the epoxy black before brushing it on to hopefully create a more uniform look from inside the cockpit when the fairing is finally completed. 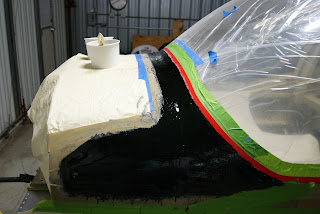 A fresh batch of epoxy dyed black slathered onto the canopy fairing lay-up. After this coat dries, the filling of low spots can begin using microsphere filler mixed into the epoxy.

Back to the fuel tank: Bernie came by to lend a hand and the two of us disassembled the mockup and began scuffing up surfaces that will receive the fuel tank sealant with 150 grit sandpaper. 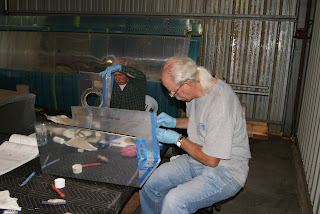 The original goal was to begin the actual assembly the fuel tank today … but, as is typical at DOG Aviation, the fuel tank preparations took much longer than expected to complete, even with the two of us having at it … although, some time was taken up mixing epoxy and slathering it onto the canopy fairing lay-up. Anyway, by the time all the parts were cleaned and all overlapping surfaces or mating surfaces were scuffed with 150 grit sandpaper, it was becoming late afternoon … so we decided not to mix any fuel tank sealant. Instead, we continued preparing the few remaining fuel tank parts for assembly. 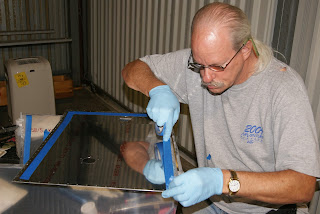 Taping off the mating surfaces on the T-1204A-1 fuel tank top skin.

As I began to work on deburring the edges of the T-1214 attach angle, I noticed the strange hole patterns on the part. In particular, the close proximity of the holes which break the rules for minimum hole spacing. A quick reference to the prints along with looking at the holes in the tank skin this part will mate with, reveled a major manufacturing error. Obviously, something went horribly wrong during the CNC process … in that there are 11 holes in the attach angle in an area where there should only be 7. 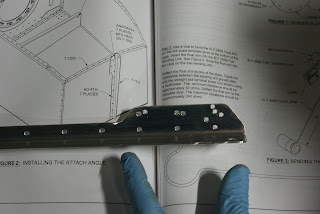 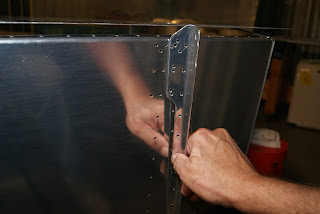 The T-1214 bracket adjacent to where it will be mounted, there are too many holes drilled into this piece …  CNC gone wild.

A call was placed to Van’s explaining the discovery and while I waited on the phone, they immediately checked their stock to see if my anomaly was more widespread … happy to report fortunately it is not. The replacement T-1214 bracket is in the mail. This is very unusual for Van’s, their parts are typically perfect. This is the first Van’s part I’ve run across that was just totally screwed up. I would suggest builders with older finishing kits that have not yet begun assembly of their fuel tank, may want to inspect their T-1214 bracket. If the upper portion of the bracket has 7 holes, you are good to go. If it looks like mine, a call to Van’s is in order.
Posted by John at 9:04 PM