Prime, Fill, File – The Order Of The Day

The weather cooperated today, so was able to mix up a batch of Akzo primer and get the outside of the RV-12’s fuel tank sprayed along with the sender plate and a couple of miscellaneous small items. I used the HVLP spray gun for the task since a fuel tank is a large item for an airbrush. It hardly seemed worthwhile using the gun for less than five minutes considering all the time it takes for setup and cleanup. The bottom of the fuel tank was sprayed first then the tank was turned over and placed onto four wooden blocks that had a rivet mandrel pounded into the center of each block of wood to prop up the tank. This was done so it would not be necessary to wait for the primer on the bottom to dry before turning the tank over ... by doing it this way the tank was only sitting on four tiny points. 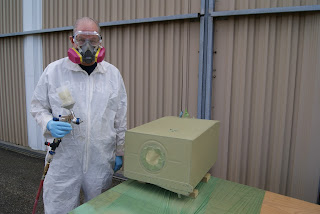 The RV-12's fuel tank and a few miscellaneous parts were sprayed in less than five minutes … hardly seems worth it because the cleanup takes about an hour.

After the spray gun was cleaned up and the tip changed for spraying the JetFlex top coat tomorrow, decided it was still warm enough to mix up a small batch of microsphere filler and slather it onto the canopy lay-up to fill a few of the remaining low spots.

While the fuel tank dried and the epoxy filler applied to the canopy lay-up cured, decided to break into the powerplant kit and begin deburring all the aluminum firewall forward parts with a file. Once the big stuff is smoothed down, will use a Scotch-Brite wheel to finish off the edges. 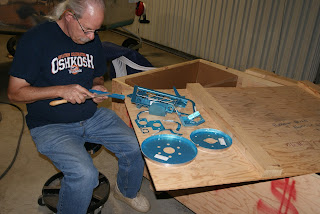 Beginning the process of using a file to deburr the shear marks on the aluminum parts that came with the powerplant kit.

Did not finish deburring the pie of parts today, so will continue on after the fuel tank and a few other parts are top coated with the Jet Flex interior paint. The forcast is for rain tomorrow in the early morning and clearing in the afternoon ...  hopefully I can get the spray session in at some point in the afternoon.
Posted by John at 9:20 PM