Today, although a short work session, the resin coating placed on the canopy fairing lay-up was very lightly sanded with 150 grit sandpaper to roughen it up for the application of microsphere filler. One full pump of resin and hardener was mixed with some black dye then microspheres added until the filler mixture was the consistency of peanut butter. The reason for the black dye is there were a few small areas adjacent to the red electrical tape where there was only resin, so wanted to dye the filler for a better look. Subsequent applications of the filler will not need to be dyed.

When mixing the microsphere filler, you should either wear a respirator or, at the vary least, a mask.  The microspheres have a tendency of becoming airborne very easily while dispensing from the bag ... and, in particular, while being mixed into the epoxy resin. I chose to wear a mask and mixed the microspheres outside, at arms length, with my back to a steady breeze.

I was hoping to get a thin even coat on the entire lay-up but quickly realized this will be at least a two step process because applying the filler in one area would put a gouge in another area so it was necessary to just fill the big stuff this time around. After a light sanding it will be easy to add filler to even things out and tweak the fairing into shape. 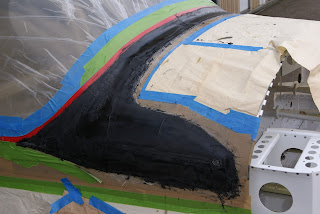 Right side of canopy fairing lay-up after applying a mixture of microsphere filler dyed black. 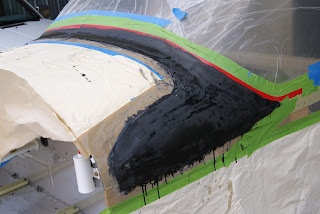 Left side of canopy fairing lay-up after the first slathering of microsphere filler.

Did not really work on the fuel tank, but did clean it up a bit with Acetone (not on the joints). Also took the time to finish cleaning the Clecos. Yesterday, they were quickly wiped off and just dropped into Acetone to soak. Today I used a rag and finished with the clean-up.
Posted by John at 7:43 PM