The Rotax 912 engine needs to come out of the box very soon … prior to installing the engine, the carburetors and intake manifold need removing in order to install the FF-1207 fiberglass cooling shroud. I would prefer doing that work on a work bench but the second workbench has the horizontal stabilator sitting on it. So prior to digging into the engine, wanted to get a couple of tasks completed. First, I plan to paint the FF-1207 fiberglass cooling shroud prior to installing it. However, the fiberglass was really rough and porous, so a mixture of epoxy resin was thinned with Acetone and slathered onto the cooling shroud to soak into all the nooks and crannies … this will create a much smoother surface for the paint and hopefully better visual appeal. After the shroud was coated with the thinned resin, it was placed into the hot box to cure. Now it has dried and is looking for the most part, very smooth … so thinning the epoxy with Acetone worked great for getting rid of all the roughness. 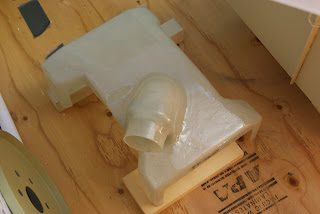 After a mixture of epoxy resin was thinned with Acetone, it was slathered onto the FF-1207 cooling shroud to fill in all the roughness of the glass weave.

Second, and more importantly, I need a workbench freed up so the engine can be placed on a sturdy surface while working on it, as opposed to working on the floor … and that meant installing the horizontal stabilator to free up the workbench it is sitting on.  The plan: Tilt the tail cone down to meet with the level of the horizontal stabilator, roll the workbench into position and bolt it up. I told Bernie about my plan to make a wooden block with a V notch so the front tire would not roll and then place wood underneath it to lift the wheel and drop the tail cone so I could keep the stabilator on the workbench and only need one helper. Bernie came up with the great suggestion of using a cement block he had and letting the wheel sit in one of the holes. This worked great to meet my low workbench … in fact, had to also add one piece of 3/8" plywood under the block to get it perfect. 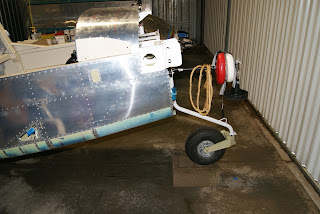 The nose wheel placed in the hole of a cement block to lower the tail cone worked perfectly. Thanks for the idea Bernie. 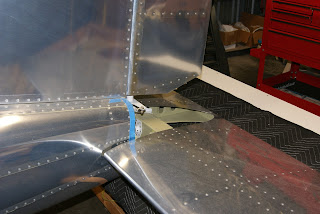 Tail cone lowered to meet with the level of the horizontal stabilator sitting on the workbench.

So far so good … next the long counterweight arm was slid into the sockets on stabilator and bolted in place. This makes the stabilator want to roll from all the weight and from this point on things became a challenge and an exercise of patience. The workbench was rolled forward until it almost touched the tail cone and the stabilator was slid forward and aligned with the bearings as best as possible.

Now for what did not work. I was hoping there would be enough access to install the bolts and washers from up above. This is where the wheels fell off and that proved to be pure folly because there is not much room to work yet alone see while bent over the top of the horizontal stabilator. At one point I climbed up onto the workbench and although the view was better it was truly difficult to even get the bolt started yet alone worrying about the washers. Finally got a bolt through the bearing on the left side without any washers just to hold positioning.

Getting back on track, it was determined the task would be far easier to complete if done from below, so with a bolt holding positioning on the left side I commandeered Mike’s creeper from the hangar next door (thanks Mike T.) and accessed the situation from bellow. Seemingly there was more room when Mike K. rotated the stabilator a little and held it so I was able to easily get a bolt fed through the inboard washer. To hold the washers, a wooden pop sickle stick was filed to have a curve on the end that matched the washer, then masking tape was used to adhere the washer onto the stick. From below the view was better and could see to easily get to the bolt in the hole, then using the pop sickle stick, placed the washer in position and slid the bolt through the washer and ultimately into the bearing when Mike K. gently moved the assembly around. I had not glued the outboard washers as suggested in the plans but found that using the stick to hold the washers the outboard washers were easily slipped into position … however a thin strip of metal was needed to push on the edge of the washers to position them correctly so the bolt would capture them. 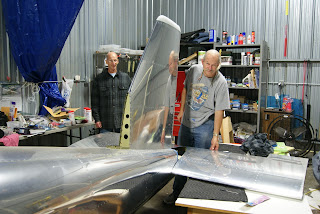 A proud moment - the horizontal stabilator is finally installed. Could not have done it without Mike K.’s help. Thanks Mike!

To finish off the horizontal stabilator instillation the anti-servo tabs were installed. The hinges need to have 3/4" of the end bent to 90 degrees … this is so the hinge pins can be safety wired onto the stabilator. 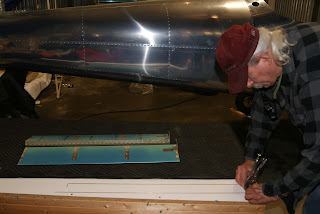 Using a seeming tool to bend the end of the anti-servo tab hinge pins to 90 degrees. 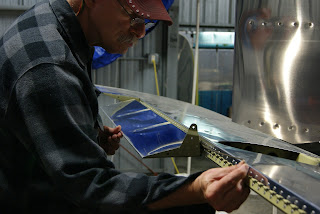 Installing the hinge pin for the left anti-servo tab. 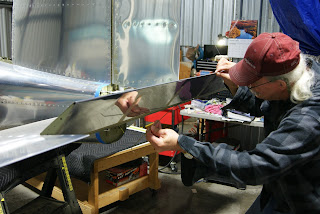 Installing the hinge pin for the right anti-servo tab - tghis needed to be done from below by deflecting the anti servo tab up to get clearance. 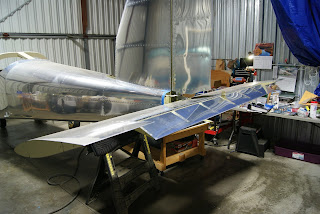 Completed tail feathers for DOG Aviation RV-12.
Posted by John at 7:48 AM