Yesterday the wind direction was favorable for rolling the RV-12 fuselage out of the hangar to continue sanding the canopy lay-up down even with the first layer of electrical tape. Much care was taken not to cut into the red electrical tape with the 150 grit sandpaper and it took at least 45 minutes or so of sanding before I was happy with the results. I did not take any photos because to the camera it looks exactly the same as the previously posted photo except now the canopy fairing is a few mills thinner in the area of the tape. The temperatures have dropped so will wait a couple of days until we are back in the mid 60’s before slathering on the next layer of epoxy resin.

In the meantime, continued preparing fuel tank parts. The edges of the T-1202 forward tank bulkhead were filed, sanded smooth and the rivet holes were lightly deburred. The T-1202 forward bulkhead also requires dimpling the 24 rivet holes that will secure the T-407 ring and the nutplates. 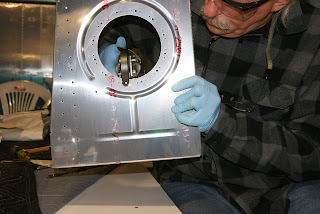 Using the pneumatic squeezer outfitted with #40 3/32" dimple dies to dimple the 24 rivet holes in the fuel tank’s T-1202 forward bulkhead. 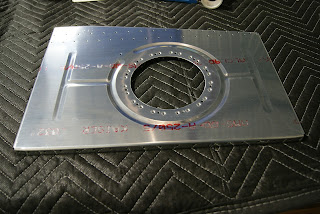 Completed dimpling of the 24 rivet holes in the T-1202 forward tank bulkhead.

Moving on to the T-1205 tank bracket I found a bracket with lots of burrs from the shearing process … and heavily bowed as well. 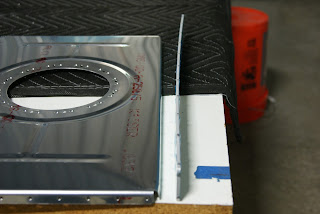 The big burrs on the T-1205 bracket and hefty amount of bowing can be seen easily here. In fact, it is bowed more than shows up in this photo.

Decided to use a soft faced dead blow hammer and beat the T-1205 bracket into submission. I left the blue film on for scuff protection and after a multitude of strategically placed blows while holding portions of the bracket off the table, the bracket now lays flat on a table. After the bracket was straightened, the burrs were filed down and the edges were dressed on the Scotch-Brite wheel. 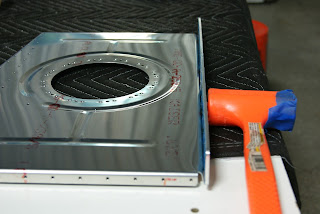 Straightened and deburred T-1205 bracket alongside the straight edge of the fuel tank … the bow is all gone.

The T-1205 bracket is then Clecoed onto the outside of T-1202 bulkhead and both the T-01220A&B doublers are Clecoed to the inside. But first, both T-01220A&B doublers need to have two of their sides rounded because each of the doublers sit over the bend where the web is bent and becomes flange. The sides of the doublers in these locations need to be filed into a radius so the doublers can sit flat yet tight to the inside curve of the flanges. This takes a little patience and filing to get the fit to the point the doublers are not lifting off the surface of the T-1202 bulkhead when the rivet holes come into alignment. Below are photos of the T-01220A doubler ... the same process was also done to the smaller T-01220B doubler as well. 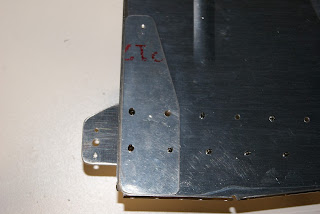 The T-01220A doubler in position ... one can see how the doubler sits on top of the bend radius. 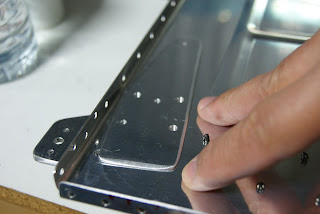 The T-01220A doubler flipped over one can see the two sides that were filed to a radius so the doubler sits flat over the rivet holes.

After both the T-01220A&B doublers were filed to a radius in the necessary areas they were secured with Clecos to the inside of the F-1202 bulkhead. There are three holes in the corner of the T-1205 that are to be drilled out to #19 all the way into the T-01220A doubler. 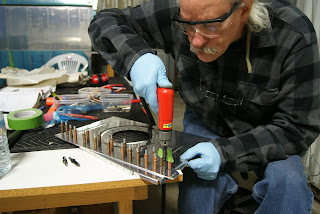 About to drill the first of three #19 holes through the T-1205 bracket and into the T-01220A doubler on the backside of the T-1202 bulkhead. The two Clecos with the green tape mark the additional two holes that will be drilled.

The lowest inboard hole in the T-1205 bracket needs to be countersunk for the head of a screw and the entire bottom row of rivet holes also receive a whole bunch of machine countersinking for flush rivets… so will start on that task later today.
Posted by John at 7:20 AM