Spent the evening yesterday preparing more fuel tank components for assembly … which will hopefully begin later today. The blue film was pealed off the T-1201-1 main tank skin,T-00008 & 9 brackets, and the T1207 &T-1208 baffles followed by the deburring of the parts with a Scotch-Brite wheel on a hand grinder. After the parts were deburred the pieces were clecoed together for a mockup of the assembly. 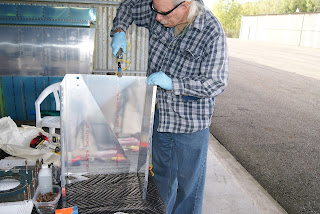 One of the changes Van’s has made to the fuel tank was builder inspired. Early versions of the tank did not have a lock for the AN832-4D return fuel line fitting and during inspections or tank removal, the fitting would come lose and begin leaking so a fellow builder made a lock for the fitting to prevent it from turning once sealed with fuel tank sealant. Van’s now supplies part T-1010, an anti-rotation bracket. The hex pattern cut in the bracket is just slightly smaller than the fuel fitting and requires the builder to use a few careful non-aggressive strokes of a file so the fitting just barely slips into the bracket. The idea here is to create a tight fit with NO play. 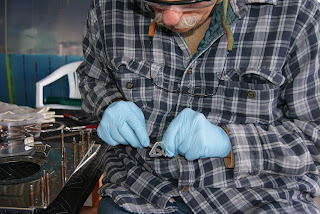 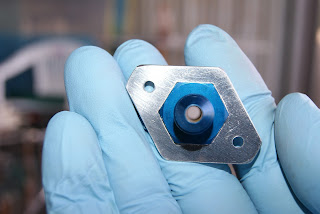 Because my fuel tank was manufactured before Van’s began incorporating the T-1010 anti-rotation bracket with the fuel tank parts, the T-12101-1 main tank skin did not have holes for the rivets that will secure the T-1010 bracket … so it was necessary to temporally install the fitting and drill the necessary rivet holes. I noticed the AN832-4D fitting did not sit flush on the fuel tank because a ridge at the base of the fitting did not go into the hole in the fuel tank and kept the fitting about 1/32" or so off the surface of the tank. It did not take much use of a jeweler’s rat tail file to gingerly open the hole a tiny bit to get the fitting to sit flush on the main tank skin and secured with a lock nut so the drilling could begin. 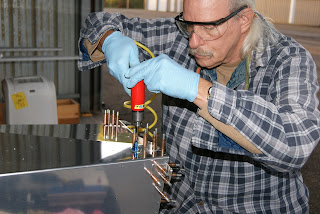 Next the two internal baffles were secured with Clecos. I installed these so masking tape could be laid down adjacent to all the overlapping parts. This is not called for in the plans but the reasoning is before the fuel tank sealant is slathered onto the parts, they need to be scuffed up with sandpaper so the sealant can get a good tooth on the metal. The tape will show me those areas that need sanding because they will be covered with tank sealant. I do not want to sand away material in other areas and lose the protective alclad coating on the aluminum. Also, the tape was placed approximately 1/16" away from the seams … the idea here is so a popsicle stick can be used to form a nice bead of sealant along the edges of the seams and when the tape is pealed away, hopefully it will create a clean edge.  Sounds great in theory, will find out how well it works out later today. 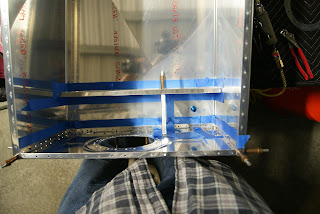 The overlapping joints marked with masking tape to define the areas that will need sanding so the fuel tank sealant gets a good tooth on the metal.

Have been avoiding purchasing a gram scale but discovered the small 1 ounce batches of fuel tank sealant only have a pot life of 30 minutes. The three ounce dispenser is 2 hours and the mix it up yourself bulk quart is also 2 hours. The consensus on the forums is to buy the bulk quart and measure it by weight and only mix what you think you will need … if more is necessary, it is easy to mix up just a little more. Van’s sells Flamemaster CS3204 AMS-S-8802 Type 2 fuel tank sealant under a Van’s part number of MC-236-B2 (Quart Kit). The kit comes with a can of base compound and a jar of accelerant and is to be mixed BY WEIGHT at a ratio of 10 to 1.   However that requires a gram scale, so went to Harbor Freight and purchased an inexpensive one that can run on AC power or battery. 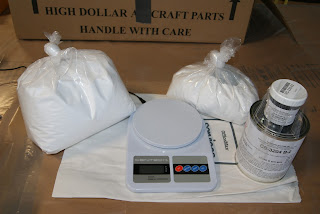 Flamemaster CS3204 AMS-S-8802 Type 2 fuel tank sealant kit and the Harbor Freight gram scale. Of note, the West Systems epoxy resin can also be measured by weight, so builders that do not want to use the dispensing pumps can use the gram scale for mixing epoxy as well.