Today was the second phase of the RV-12’s fuel tank assembly and it was a hectic work session. The T-1201-1 main tank skin,T-1202 forward tank bulkhead assembly, T-1205 Bracket, VA-210 fuel flange, T-00008 & T-00009 inboard and outboard clips and the T-01220A&B doublers were all riveted together in one fast paced riveting session. There are seven different pop rivets used, ... so keeping track of where the rivets are being placed is crucial.  Because of this, all the rivets and hardware was counted out in advance and placed in groups on paper plates or trays. Builders WILL want to do that … because once the fuel tank sealant is mixed, there is not much time to get all the rivets and parts assembled before the sealant really thickens up. 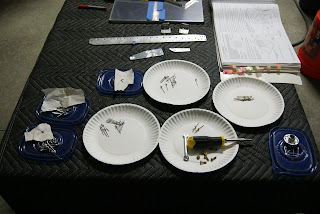 All the rivets and hardware was counted out in advance and placed on paper plates or lids so there was no searching for parts and no reaching into clean stock with tank sealant on the fingers. 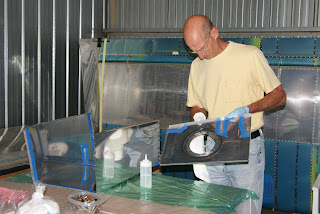 The order of assembly I chose was to first coat the mating surfaces of the T-01220A&B doublers and place them onto the T-1202 forward bulkhead securing them with only two Clecos in each part. Next the T-1201 main skin and F-1202 forward bulkhead mating surfaces were slathered with fuel sealant and while Mike flexed the sides of the tank skin outward, the T-1202 forward bulkhead was set in place then Clecoed … amazingly we were able to do this without scrapping off any of the fuel tank sealant. Then the VA-210 fuel flange was riveted in place. At this point, the T-00008&9 clips were slathered with sealant and Clecoed in place. This was followed by applying the fuel tank sealant to the T-1205 bracket and its mating surface then securing the parts together with Clecos.

Next, the bulk of the riveting began. All the rivets were set in the T-1205 bracket (except the one that needs to be left open for the tank baffle which is installed later) then the T-00008&9 clips were riveted, followed by the riveting of the bottom and the sides of the T-1201-1 tank skin to the F-1202 bulkhead.

The assembly was a fast paced process that required setting a lot of rivets in a minimal amount of time … roughly a hundred.  With Mike’s assistance the assembly went, for the most part, quite smoothly. The only rivets that offered much of a fight were the Cherry structural rivets. We originally mixed 20 grams of sealant and then mixed another batch of 20 grams. That ended up working out nicely. 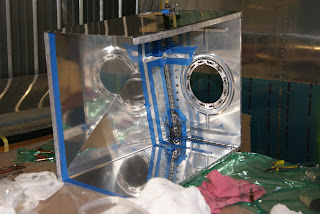 Inside of tank after riveting and prior to removing the masking tape adjacent to the wet tank sealant. 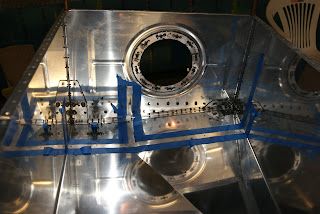 Inside of tank after removing the masking tape adjacent to the wet tank sealant. 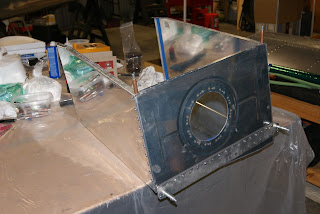 Front of tank and the aftermath of phase two of  “let’s make a fuel tank".

Thanks to Mike for all the assistance, without his help it would have been a rough afternoon. The next phase of fuel tank construction will involve riveting the baffles in the tank and building the fuel return line that is installed inside the fuel tank.
Posted by John at 6:43 PM