Yesterday, the RV-12 was rolled outside the hangar and the microsphere filler was smoothed down with 150 grit sandpaper in preparation of mixing up another batch of filler to fill those small low spots skipped during the first installment of filler. When applying the first batch of filler, it was quickly discovered it was better to fill the bigger spots first and skip smaller areas because the applicator squeegee was digging into areas already filled and leaving groves. 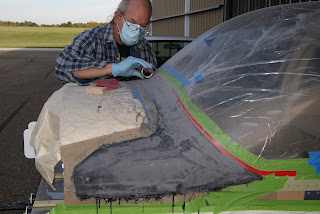 Well “Doctor Sander”, how is the patient responding to the physical therapy? “Good progress has been made, but the patient requires more topical treatments to obtain optimum results”. The gray areas are sanded microsphere filler, the darker areas are the low spots that still need filling.

Weather conditions should be favorable later today for another application of microsphere filler to smooth out those areas that were bypassed during the first application.

Moving back to the fuel tank, two T-1216 clips are to be fabricated from .032 aluminum … a scrap strip of .040 metal leftover after cutting out the cowl oil door was cut to 1/2" wide and used to make the two T-1216 clips. I came up with a nice way of forming a curve on the clips to fit the 1/4" aluminum fuel line they will be securing. The curve was formed by placing the long aluminum strip on top of a V block then compressing the shaft of a Philips screwdriver down into the V block with a vice to create a half moon bend in the metal. Worked better than I had hoped for. 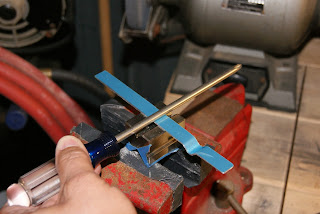 The aluminum strip was left long and the shape for the two clips was formed by compressing the screwdriver down into the V block with a vice thus forming the curve for the T-1216 clips … this method worked great for forming the half moon shape. 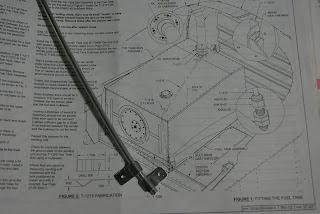 One chore that was not accomplished when working with the T-1205 bracket was to rivet the nutplates in place that attach to the inboard and outboard end of the bracket and clips. 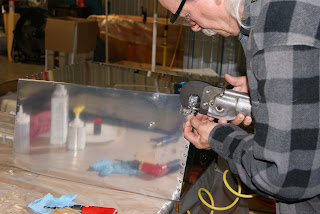 Using the pneumatic squeezer to rivet the K1000-3 nutplates onto the T-1205 forward tank bracket and associated clips. 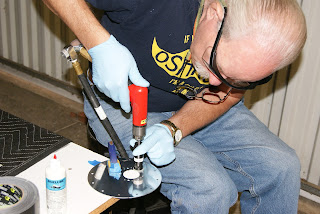 Machine countersinking one of the ten rivet holes in the T-1209 fuel tank sender plate.

Inside the tank, the T-1215 aluminum fuel return line needs to be fabricated from 1/4" aluminum tubing. The T-1215 fuel return line will attach to the previously installed fuel return fitting and carry the returning fuel back and up through fuel filler flange at the rear of the tank. The following is pure speculation on my part … I’m guessing Van’s feels the returning fuel has the possibility of being quite warm (think heat soaked engine compartment after landing and a 10 minute shutdown for bathroom break then a long ground taxi to take off again), the fuel returning will be deposited in the filler neck where it can aerate and cool a little as it falls to the rear of the tank. The fuel forward of the baffle, where the fuel pickup resides, will continue to stay much cooler than the returning fuel … thus supplying the engine with coolest fuel possible. Also, and perhaps more importantly, there will be no backpressure on the returning fuel if it returns above the normal fuel level in the tank. 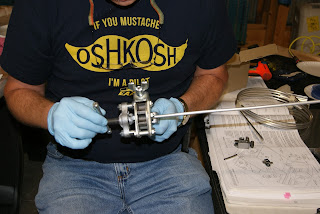 Using the Parker-Rolo flaring tool to flare the end of the T-1215 aluminum tubing.

The T-1215 aluminum tubing is to be bent to 90 degrees adjacent to the top skin of the fuel tank and routed aft through the two T-1216 clips where it will take another bend up and through the fuel flange hole on the aft end of the tank.  When bending the tube, it slipped from the desired location (unnoticed by me) so the bend ended up about a 1/4" or so too long and interfered with the top skin of the fuel tank. As such, I needed to make a small offset by hand to make it to work. As a dry run, the aluminum fuel return tubing was installed so the location for the final bend could be determined. 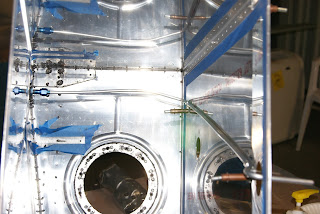 Finalized routing of the T-1215 fuel return line from the fuel return fitting up across the top skin of the fuel tank and exiting through the hole for the T-1204B flange.

Unfortunately the path Van’s chose for the fuel return line is directly inline with a rivet that will secure the fuel flange to the top skin of the fuel tank so a small offset was made to clear the rivet before making the bend so the tubing exits the tank through the flange hole. 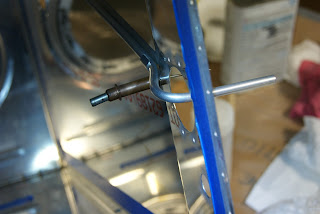 As can be seen, a small offset was made to clear the rivet that the T-1215 fuel return line crosses prior to exiting the fuel tank. 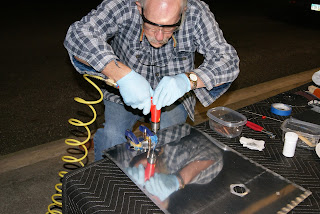