In addition to countersinking the recently drilled #19 lower inboard hole to fit the head of an AN509-8R10 screw, the entire lower row of rivet holes on the T-1205 bracket needed to be machine countersunk. As can be seen in the photo below of page 37-03 of the plans, much care needs to be taken during prep and assembly because five different rivets are used on the T-1205 bracket. 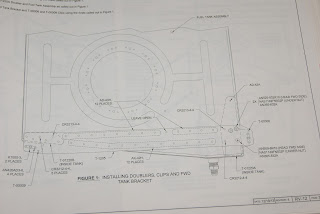 Photo of the drawing for the T-1205 bracket with hardware callouts.

Page 37-02 of the plans show the rivet holes in the T-1205 bracket that need to be machine countersunk … which is essentially the lower row of rivet holes and the nut plate mounting holes. The plans also say to “Machine countersink the #30 holes on the forward side of the T-1205 Fwd Tank Bracket called out in Figure 4 to fit the heads of the rivets called out on Page 37-03, Figure 1”. Nowhere in the instructions nor in section 5 (where the rivet chart resides) does it tell the builder what the rivet’s head angle is. CAUTION: THEY ARE NOT THE SAME! And a potential gotcha.  Admittedly, this is not that big of a deal since everything will be slathered in fuel tank sealant anyway, but it would have been nice to mention the difference in the first place so the rivets fit as best as possible. This almost slipped by me but I was taking a close look at the two rivets and realized the head profiles were slightly different between the two. Verified using online sources … in this case, Google was my friend. 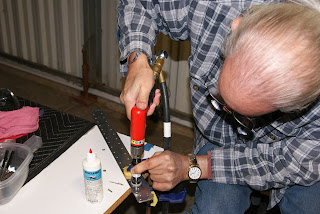 Machine countersinking the last rivet hole in the cluster of five rivet holes on the outboard side of the T-1205 bracket that receive 100 degree countersinks for CR3212-4-4 rivets. 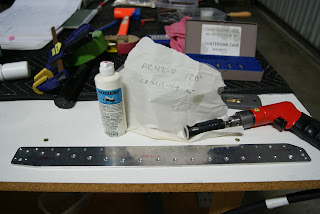 Completed machine countersinking of the T-1205 fuel tank bracket.
Posted by John at 7:05 AM