With a little help from Mike K. the RV-12’s canopy was unbolted and easily removed from the fuselage by lifting straight up. (Frequent readers of the DOG Aviation blog may remember the canopy lay-up was broken free from the Vaseline covered tape a week or so ago). The reason for removing the canopy now is two fold in that the temperatures forecasted for the next few days are not ideal for properly curing the epoxy filler so figured the canopy can be trimmed to the final size so it needs to be removed for that … and the fuel tank needs to be temporarily bolted in place in the fuselage so the filler neck can be adjusted to the shape of the turtle deck and then match drilled. 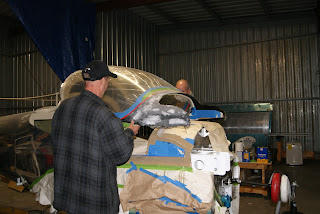 Mike K. giving me a hand with removing the canopy from the fuselage.

Now that the canopy is removed, figured may as well also remove all the protective tape layers and masking. The duct tape and masking tape came off without any issues … HOWEVER the packaging tape was another story. For some reason there were spots where the adhesive pealed away from the tape and remained on the aluminum. Did not want to use solvents to remove the adhesive, so used the duct tape that was just removed to pull the adhesive off the metal. This was time consuming but eventually all the adhesive left behind was removed. 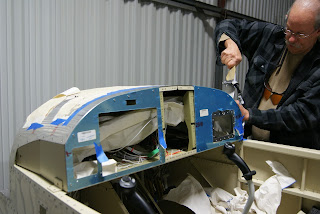 Removing the duct tape that was placed onto the upper forward fuselage skin for the canopy lay-up. 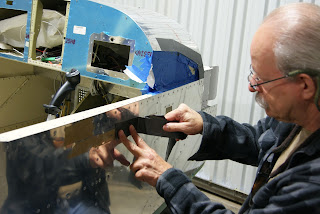 Using duct tape to remove the brown adhesive left behind from the removal of the packaging tape. Tape collecting the brown adhesive that pealed off the packaging tape. 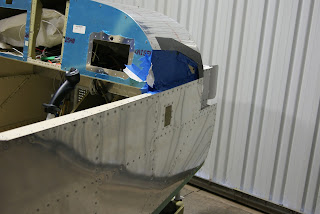 Back to looking like aluminum after removing the brown adhesive.

Moving on to the fuel tank, the rivets placed into the T-1203 aft bulkhead yesterday, were coated with tank sealant. Once again a syringe was loaded with the tank sealant and used to apply the sealant around all the rivets. The plans also call for plugging the tooling holes in the T-1207 & T-1208 baffles so the tank sealant was used to fill the four tooling holes in the baffles. Also installed the fuel tank vent fitting on the T-1204A-1 top skin and placed sealant around the nutplate rivets on the sender plate. 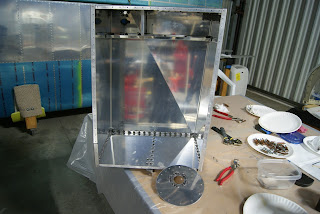 The rivets installed yesterday were covered with tank sealant along with the nut plates on the sender plate. 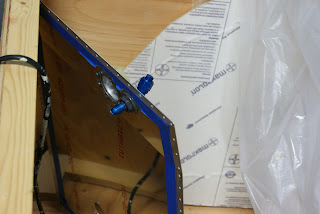 The fuel tank is now ready for the T-1204A-1 top skin to be Clecoed in position and the fuel tank temporarily installed in the fuselage so the filler neck can be match drilled for the instillation of nutplates. Once the drilling is completed, the top skin will be removed and any debris that made its way into the tank can be cleaned out.
Posted by John at 9:45 PM