The first task of the day was installing the safety wire for the anti-servo trim tab’s hinge wires. There are two small holes in the center of the aft spar on the horizontal stabilator that are used to capture both trim tab hinge pins with safety wire. 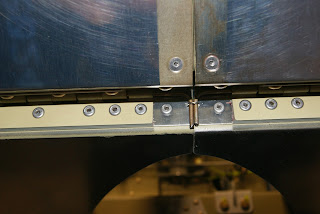 The safety wire for the hinge pins is run through two holes in the stabilator’s aft spar and looped over the hinge pins for the left and right anti-servo trim tabs to secure them in place. Note: The discolored metal is not corrosion ... it is from the SanChem metal treatment (similar to Alodine but eco friendlier) that was done to the inside of the skins. 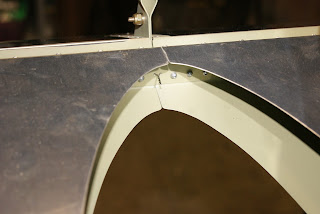 The safety wire for the hinge pins is twisted tight on the forward side of the stabilator’s aft spar.

The trim motor assembly is attached onto the tail cone’s aft bulkhead using a long AN3-35 bolt and a couple of spacers. Nothing difficult, but everything is a tight fit and the work is done from under the horizontal stabilator, so it takes a little finessing to get all the components in place. Placing the trim servo motor tray in position so the mounting bolt and spacers can be installed.

One thing of note:  Builders should pay close attention to the AN3-10A bolt called for attaching the trim servo push rod onto the horn on the trim tabs. The bolt is just a little too long as can be seen in the photo below, so it will be necessary to add an additional washer or use the next size shorter bolt. The DOG Aviation procurement department purchased an assortment of bolts just to have on hand so will likely need to look in that parts bin. The short term fix will be adding an additional washer, but during the first annual plan on replacing the bolt with a shorter bolt. 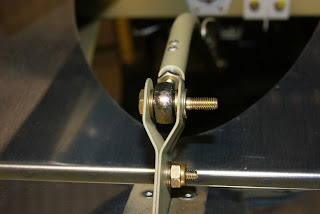 As can be seen in the photo, the AN3-10A bolt called for in the plans is a tad long .. the nut would have bottomed out on the unthreaded shank of the bolt. 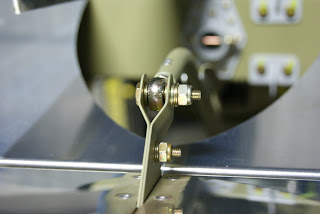 Adding an additional washer took up enough space so the nut did not run out of threads while being tightened.


Return from the future: I did not like the way the bolt looked because there were more threads showing beyond the nut than the one to three threads the "standard" calls for. Decided to rearrange the washers on the bolt for a better instillation. The resulting instillation used an AN960-10 washer under the head of the bolt and in addition the AN960-10 washer that goes under the AN-365-1032 lock nut, I added an additional AN960-10L washer. The AN960-10 washers on either side of the MM3 bearing were left undisturbed. The result is a perfect fit and the instillation looks much better now. 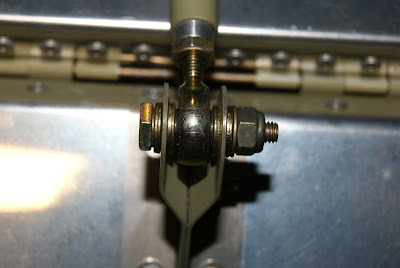 Having the trim motor in place and connected to the anti-servo tabs it was time to operate the trim motor through its range of motion to check for free operation of the horizontal stabilator along with checking clearances. All was well.

Of note to other builders: I did not play around with the micro connector as suggested in the plans for a location to place voltage on the trim motor’s white wires. Instead, applied the power at the end of the servo cable in the instrument panel. Reason for this was two fold … first, did not want to mess with applying power to the pins of the delicate micro connector at the servo motor end and possibly damage one of the tiny pins. And secondly, I had not yet operated the trim motor to determine which of the two white trim motor wires ran the trim tab up or down when a positive voltage was placed on it … and this information is needed when installing the trim cable’s wires into the connector. Now I know and marked the wires accordingly. Also, did not bother using a bulky 12 volt battery … a 9 volt transistor radio battery works just fine to operate the trim motor throughout its full range of motion a few times.

After cycling the trim motor a few times and checking for clearances and freedom of movement, the plans instruct the builder to use two wire ties to secure the trim motor cable onto the servo tray. The first wire tie just loops through the small hole adjacent to the wiring connector and the second wire tie is to loop through the first wire tie and then around the servo cable to hold it in place. Doing this holds the wire just fine … but doing so also draws the cable onto the edge of the metal servo tray. Not wanting the servo cable to ride against the servo tray, decided to create a standoff by cutting a small piece of vinyl tubing and looping the wire tie through the tubing. The first loop of wire tie is run through the hole as per the plans and the vinyl standoff was attached onto that loop. 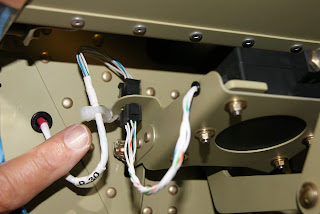 My finger is pointing to the standoff made by using a small piece of vinyl tubing to keep the servo cable off the servo tray. This is a much better way (IMHO) of securing the cable to the servo tray than the method called for in the plans.

After verifying the anti-servo trim tab was working correctly and all the clearances were good, moved onto installing the tail cone’s fairing for final drilling. The fairing needs to placed in position and then centered as best as possible between the stabilator’s skin so the final drilling of the fairing’s mounting holes into the tail cone can be completed. The goal stated in the plans is to have the fairing centered as best as possible and then verify there is at least a 1/8" clearance between the fairing and the stabilator.  In my case, it will involve filing/sanding away some aluminum from the stabilator skin. The loss of clearance and ultimate interference is mostly along the aft portion of the fairing as can be seen in the photo below. 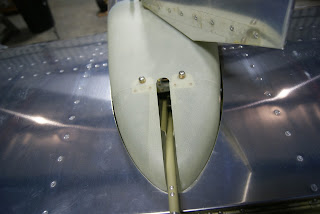 The sides have close to the specified 1/8” clearance between the fairing and the stabilator skin but the same can not be said for the aft portion of the tail cone fairing.

The above interference should be easy to address with the aid of a sanding drum on a Dremel tool and a little filing at some point in the near future.