In addition to the mechanical Moeller fuel gauge, the RV-12 fuel tank is also equipped with a sending unit that is connected to the SkyView … this allows the Dynon unit to receive fuel level information so it can be shown on the primary flight display. When the sending unit’s float arm is removed from the box, there is already a hooked end to capture the float …. However, the rest of the arm is straight and requires the builder to make two bends per the plans. The plans would suggest the drawing is 1:1 but on the plans there are measurements for 6 1/4" that do not match the drawing … my drawing appeared to be a little shorter. Decided to bend the float arm as shown in the drawing but used the measurements shown in the drawing. Below is a photo of the drawing and the sender unit arm after the first bend was completed. 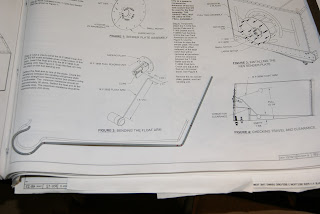 A vice was used to secure the float arm and the bends were made by using a piece of wood to bend the arm … doing this leaves the metal rod as straight as possible. Once the bends are completed and the excess rod cut off, the float rod slips onto clips on the sending unit’s arm. Ohm readings were made and were almost spot on to the published 30 to 240 ohms as the float arm is moved through its full range of motion. 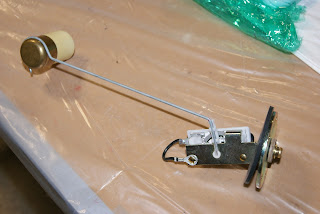 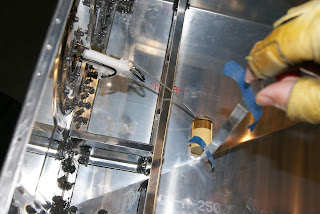 Top of the float in the low position is approximately 1 5/8" off the bottom of the tank. 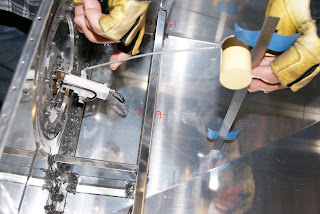 Top of the float in the high position is approximately 10 1/4" off the of the bottom of the tank. 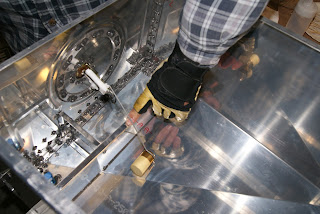 Today the plan is to install the top skin of the fuel tank … more fuel tank sealant fun, can’t wait ... not.
Posted by John at 7:11 AM