Did not get much accomplished yesterday because the two tasks for the day took longer than expected to accomplish. The inside of the fuel tank was cleaned up a little using wooden cotton swab sticks wetted with Acetone. The objective was to remove finger prints and miscellaneous smears and the occasional small string of sealant. The joints were left alone. After the tank cleaning, the top was temporarily secured onto the tank with Clecos and per the plans, the tank was placed in the baggage area and bolted in position. I used a bunch of washers under the bolts so as to not have to screw them in all the way. 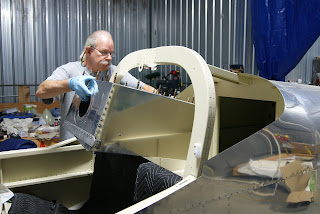 Carefully slipping the fuel tank assembly into the baggage area to adjust the shape of the flange on the T-1211 fuel neck.

Once the tank is bolted in position, the flange on the T-1211 fuel neck is to be fitted to the curve of the turtle deck as best as possible by bending the flange of the fuel neck. The plans say small gaps can be filled with fuel tank sealant. I initially marked the areas where the flange could be bent to have an immediate impact. Then tweaked the flange with many cycles of removing, bending and reinstalling. 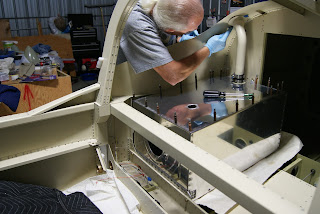 Placing masking tape to mark one of the two locations that will have the biggest initial effect on closing the gap between the flange and the turtle deck. The gap at the start of the process is significant as can be seen in the photo.

Due to the way the turtle deck curves and the surface area of the flange, I think it would be very difficult to get the flange to sit perfectly flush on the turtle deck. I found when attempts were made to fine tune the bends, larger gaps would appear in other areas. I suppose, if one had a shot bag and fender forming tools the flange could be made to be a near perfect fit … unfortunately, DOG Aviation does not have access to those types of body work tools. I got it fairly close, but admittedly, it is not perfect. However, later the area will be slathered with mold release or oil and a thick application of tank sealant will be applied to form a removable custom gasket so any small imperfections between the turtle deck skin and the flange on the T-1211 filler neck will be taken up by the tank sealant gasket. 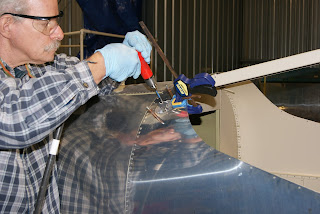 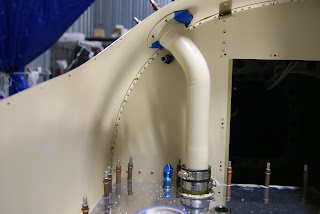 Final fit of the T-1211 fuel filler neck to the F-1277R turtle deck after the match drilling process. There is still a tiny gap but that will easily be taken up with fuel tank when the custom gasket is formed.
Posted by John at 8:20 AM