Now that most all of the parts for the RV-12 fuel tank have been prepped for assembly, the first batch of fuel tank sealant was mixed and the fun began. Fortunately Bernie was available to lend assistance. I may be wrong (time will tell) but I think today’s task of riveting the T-407 ring and the associated 12 nutplates onto the T-1202 forward tank bulkhead is most likely going to be the toughest task of the fuel tank assembly process. I was grateful to have Bernie assisting and would wholeheartedly suggest builders tackling this task to consider having a helper.

Did not take any photos of the process until finished because, trust me, you do not want a camera anywhere near fuel tank sealant. It has a tendency of getting on everything in its vicinity.  To start, the F-1202 forward tank baffle and T-407 ring received an Acetone washing on the mating areas, followed thin layer of fuel tank sealant on each mating surface ... then the parts were mated and one Cleco was placed in one of the rivet holes for every nutplate. Now is a good time to run a wooden cotton swab stick through the screw holes to remove excess sealant. The stick was run through the holes from behind and then Bernie wiped the stick clean with a rag wetted with Acetone then the stick was removed and moved to the next screw hole. Next (and this was probably not necessary) the rivet holes on the nutplates were dipped in the fuel tank sealant all the while being careful not to get any fuel tank sealant into the threaded portion of the nutplates ... easier said than done as the gloves get really sticky and gooey quickly. Each nutplate was then installed on the single Cleco, then a second Cleco was added to hold the nutplates tight. After the last nutplate was in place and ready for riveting, the fun began.

I would remove a Cleco and place a small smear of sealant in the dimple of the rivet hole while Bernie dipped the AN426AD3-4 rivet into the sealant and placed it into the hole. The pneumatic rivet squeezer was then used to slowly set the rivet. Repeat the process 23 more times … as hands, tools and work surfaces get stickier and messier.

Once finished riveting the parts together, a wooden stick from a cotton swab was once again fed in from the back side of the nutplates and used to pick up any fuel tank sealant that had worked itself into the screw hole. The stick was wiped clean and then pulled back out of the nutplate and moved to the next nutplate.

Suggestions: Wear multiple layers of gloves so one can be pealed off and another added without dealing with sweaty hands clinging to the gloves. Mix the tank sealant on a plastic plate so you don't have to worry about paper or wax contamination. Get the rivets and nutplates counted out and on the table ready to go so there is no fishing for parts with tank sealant on the hands remember there is only 2 hours of work time once the tank sealant is mixed (really less because it begins to get quite thick sooner). Have Acetone and rags ready to clean the Clecos, rivet sets, and minor drips. Wooden cotton swab sticks are good to have on hand. Wooden tongue depressor sticks (or Popsicle sticks) come in handy … they were cut to various widths and came in handy to measure out the sealant and also as applicators and shaping tools. We used pallet wrap on top of the work surface and it was changed at least three times. (Wouldn’t suggest pallet wrap because it is too clingy … but it was on hand. Plastic sheets or garbage bags would be a better choice). 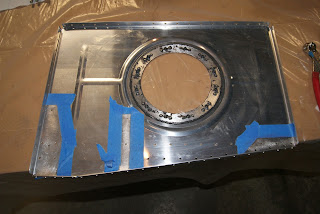 Rear view of finished RV-12 fuel tank forward bulkhead assembly with T-407 ring and nutplates riveted in place. Could have cleaned it up … but did not want to get near the nutplates with Acetone. 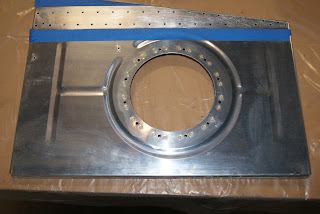 Front view of forward bulkhead assembly after cleaning up the fuel tank sealant with Acetone.

At the hour and 45 minute point the fuel tank sealant was starting to get thick so had just enough time to rivet the T-1010 anti-rotation bracket in place and install the AN832-4D fuel return line fitting. 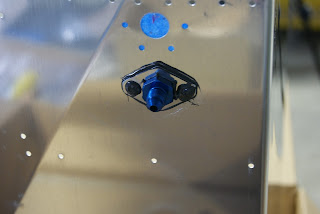 Because the evening temperatures are beginning to get cool in this part of the country, decided it would be best to make an attempt to let the epoxy cure overnight in a warm environment. Used the finishing kit crate and two incandescent light bulbs inside to create a little heat. After the fuel tank parts were placed into the crate, the lights were turned on and the crate was covered with a plastic sheet to hold the heat inside so the fuel tank sealant can cure easier. 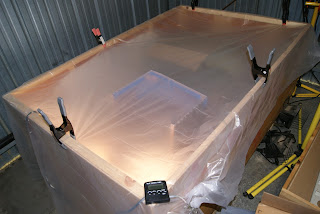 Finishing kit crate with two light bulbs inside being used to create a warm box for curing the fuel tank parts that received fuel tank sealant.
Posted by John at 9:23 PM