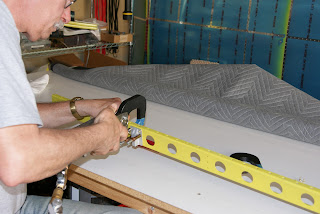 Using the pneumatic squeezer to rivet the A-1206 pivot bracket
onto the right flaperon’s spar using AN470AD4-4.5 rivets.

Basically, the same procedure is being used to assemble the right flaperon that was used on the left … with one small exception on the A-1207R actuator. During the riveting of the actuator for the left flaperon, the rivet squeezer slightly grazed the actuator (even with the small diameter rivet set) because the rivet line is much closer to the fillet radius than optimum. So this time an attempt was made to alleviate any marring of the actuator’s anodizing by placing masking tape on the actuator followed by taping a thin piece of scrap metal between the rivet line and the fillet radius on the actuator.  This worked very well and the right actuator was riveted without any marring what so ever … wish I had done that for the left actuator where I now have two small mars. 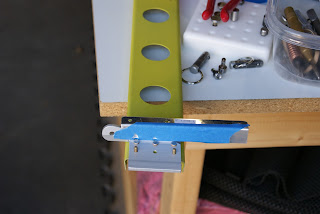 A piece of scrap metal used to protect the anodizing on the A-1207R actuator
during riveting … note the scrapes left on the scrap metal after riveting. 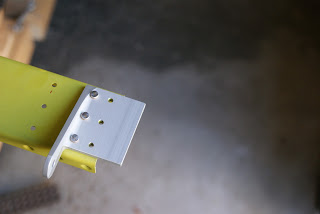 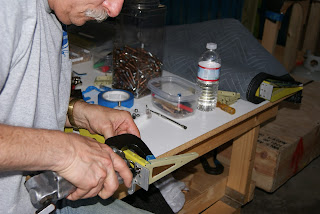 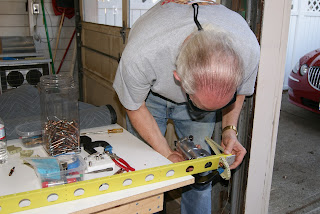 Using the pneumatic rivet squeezer to secure the inboard A-1210R nose rib/bracket
assembly onto the right flaperon’s spar with AN470AD4-4 solid rivets.
Posted by John at 10:39 AM