Continuing where the riveting left off yesterday, the day began by setting rivets into the long, seemingly endless, row of rivet holes that are in the main spar of the RV-12’s right wing. The riveting began in the center of the spar and working towards the outboard and inboard ends of the right wing. Wow! A lot of rivets are in just that one row … ask my back how I know. 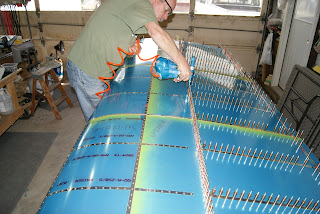 Beginning the riveting of the long row of closely spaced rivet holes
which secure the wing skins onto the right wing’s main spar.

After the main spar riveting was completed, riveting continued by riveting the upper wing skins onto the W-1210 ribs one row at a time working from the main spar aft to the rear spar. Making progress … the finish line is in sight. 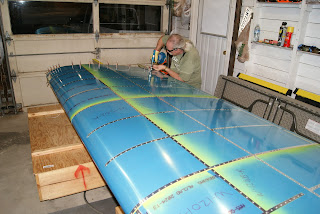 Setting the last rivet securing the outboard portion of the W-1203B-R wing skin to the rear spar assembly. 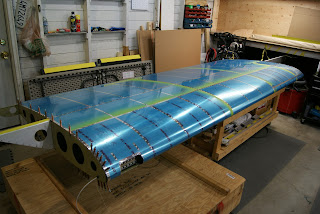 Right wing’s top skins riveted in place with flush rivets.
At this point, all of the rivets are in the right wing’s main skins with the exception of the outer edge of the W-1203 and W-1203B skins. The rivet holes on the outer edges of those two skins are left open because the wing’s tip skins will be sharing those holes.
Posted by John at 8:01 PM