The Eagle Finally Has Two Wings!!!!!

Although there was not much work left to complete the right wing’s wing tip closeout, short work sessions contributed to it dragging on for a few days. The W-1204C-R aft bottom skin was riveted in place but, as on the left wing, the aft two rivets were left out to allow for the small assembly change of tucking the forward edge of the W-1204H-R wing tip close-out skin underneath the W-1204C-R skin. Personally, I feel it makes for a much better fit … plus, it removes the forward edge of the W-1204H-R skin from the airflow.

The tabs on the W-1204D-R bottom wing tip skin that were previously bent to the angles suggested in the instructions, still required dimpling … so that was done prior to installing the skin in place on the wing tip. 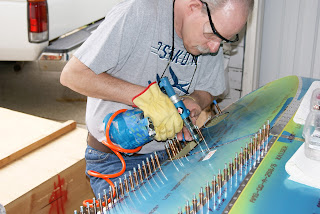 Using the pneumatic rivet puller to rivet the W-1204D-R wing tip skin onto the right wing assembly with flush rivets.

As with the left wing, most of the bottom rivets set into the aft wing tip rib interfere with the rivets already set securing the top skin. The rivets set up quite a bit and care must be taken to have them seat correctly. The close quarter hand rivet puller was used while steadily pressing down on the rivet as it begins to form to ensure the rivet sinks down into the dimple correctly. One squeeze is used ... which is not enough to break the mandrel but enough to pull the rivet down into the dimple. At this point, I like to switch over to the pneumatic rivet squeezer to finish the rivet because one never knows which way the hand rivet tool will move when the rivet's mandrel breaks. 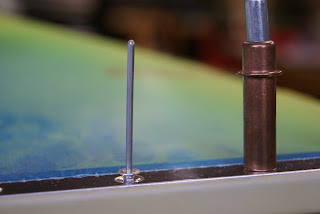 Rivet sits high in the wing tip rib because it is hitting the rivet on the other side of the rib. 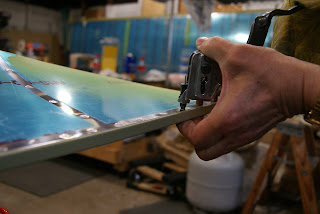 Using the close quarter rivet puller to set the rivet into a rivet  hole dimple on the aft wing tip
rib by using downward pressure while slowly squeezing the handles of the rivet puller. 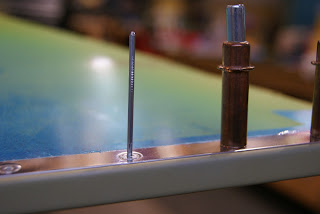 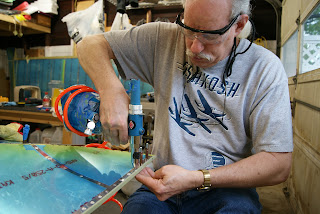 Using the pneumatic rivet puller to finish off the rivet.
The W-1204H-R wing tip close-out skin is the last component attached to the RV-12’s right wing to complete the wing. The decision has been made to tuck the forward edge of the tip close-out skin under the W-1204C skin for a smoother transition. 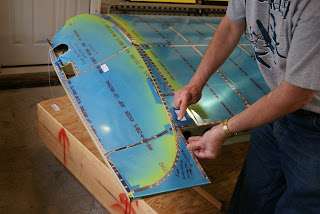 W-1204H-R wing tip close-out skin being placed in position … pointing to the leading edge
rivet hole which will be placed UNDER the W-1204C skin for a smoother transition. 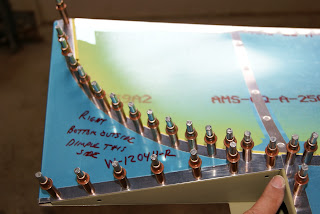 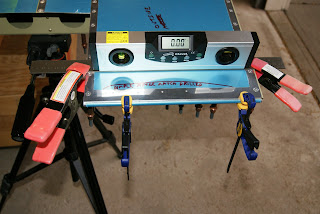 Aft wing tip angle adjusted to match the plane of the rear spar. 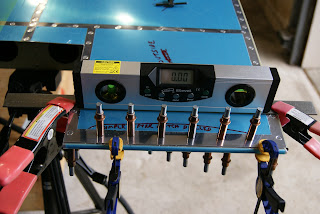 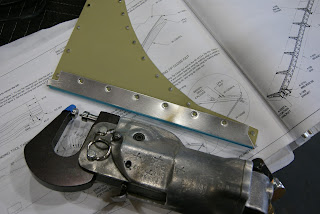 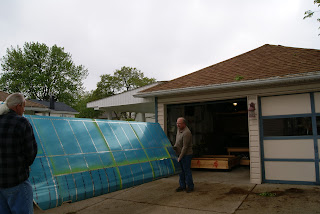 Scott, Jan’s brother, was up visiting and immediately put to work flipping the right
wing over so the W-1204H-R wing tip close-out skin could be riveted in place. 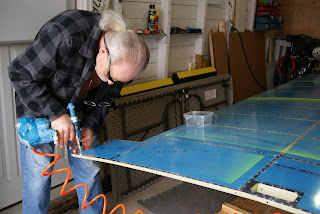 The momentous occasion of setting the last rivet into the RV-12’s right wing! 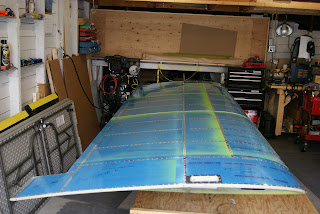 Completed RV-12 right wing ready for the side pocket in the wing rack… the flush rivets sure look nice!
Posted by John at 10:05 PM