Work on the RV-12’s right flaperon continued today after taking a few days away from the project to spend some time at the “southern outpost” and to attend a pancake breakfast held by EAA chapter 1077. Figured becoming acquainted with general aviation in the area would be a goof idea because at some point in the near future, the RV-12 project will require an airport to call home base … and my preference would be for that airport to have a local EAA chapter if possible.

The previously match drilled counterbalance, nose skins, and nose ribs were disassembled for deburring followed by dimpling of the nose ribs and appropriate nose skin holes.

While there is still room on the workbench, decided to jump ahead  and completely prepair  the aft skins and nose ribs. The outer edges of the A-1202A&B aft skins were dimpled last fall but the more difficult holes still required dimpling so the screw and nut method was used on the aft most holes at the narrow portion of the V and the nail and hand rivet puller method was used to dimple the remaining holes. 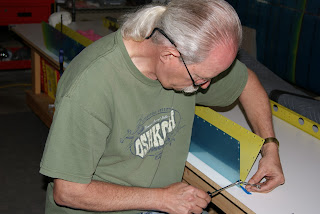 Using a screw and nut to squeeze the dimple dies together and
creating a dimple at one of the tight access holes on the aft skin. 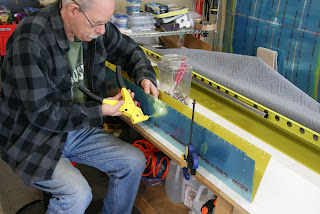 Making a dimple on the A-1202A-R aft flaperon skin with the hand rivet
puller by pulling on a nail placed through the center of the dimple dies.

Once all the necessary dimples were created, the blue protective film was removed from those locations on the skins which will be overlapped so protective primer can be sprayed tomorrow. 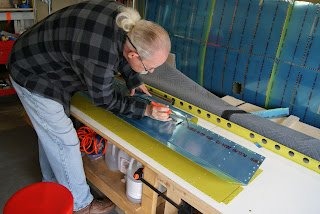 Using one of the nose ribs as a guide for the soldering iron to melt the blue film from one of the right flaperon’s aft skins. 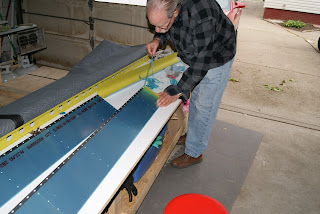 Pealing back the blue film from an aft flaperon skin in preparation for priming.
Posted by John at 7:31 PM