Dimpling Of The Left Flaperon's Ribs

Once the match drilling the flaperon’s stainless steel counterbalance pipe and the   A-1204 & A-1210 nose ribs was completed, the components were disassembled for deburring and the nose ribs were dimpled for flush rivets using the dimple dies with the hole for a nail. 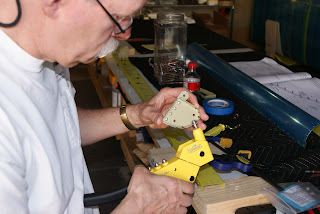 Dimpling the flaperon’s nose ribs for flush rivets using the 120 degree
dimple dies with holes for a nail to be pulled with a hand rivet puller.

The big burrs were removed from the stainless steel counterbalance pipe using a metal broom handle with an open end placed inside the stainless steel pipe to help scrape off all the burrs on the inside of the pipe … this was followed up by using a hand deburring tool. 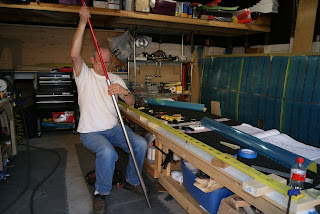 Scraping burrs off the inside of the stainless steel pipe using the edge of an old metal broom handle. 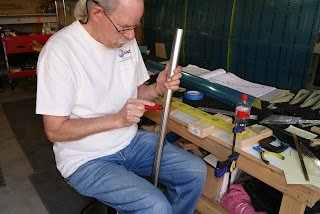 Using a hand deburring tool to remove any left over burrs in the counterbalance.
Prior to riveting ribs onto the flaperon spars, there was a substantial amount of dimpling which needed to be finished up. The A-1205 aft ribs required dimpling and were dimpled using the “no hole” yoke on the pneumatic squeezer and the small female die with a hole in it stuck onto the yoke with tape. This method was used for dimpling all the holes except the very last top and bottom hole at the narrow aft end of the rib. These holes required using the C-clamp method to squeeze the dimple dies together to form the dimples. 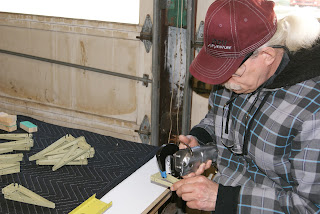 Using a pneumatic squeezer to dimple the “easy” holes on the flaperon’s A-1205 aft ribs. 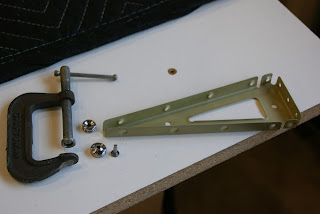 Setup for creating dimples in the tight spots on the A-1205 ribs using the C-clamp method. The head
of the nail goes from the outside through the male die and into the female die to hold alignment. 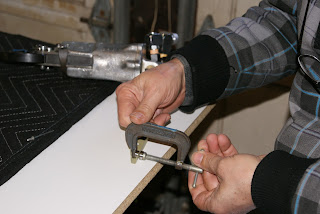 C-clamp in position and about to create a dimple in one of the tight aft holes on the A-1205 rib.
Posted by John at 8:27 PM