As previously mentioned in prior posts, the fit of the RV-12’s parts thus far has been nothing less than superb … which reflects the quality of based Van’s Aircraft’s kit components.  That said, there are places in the instructions where you end up scratching your head and say to yourself … “what”??. The flaperon instructions created one of those moments. Case in point: The instructions tell the builder to build the right flaperon as a mirror image of the left flaperon. OK, a mirror image is a reflected duplication of an object which appears “identical” but is reversed. Sounds simple enough right?

So what’s the confusion? Well, the plans have the builder rivet the A-1208 bracket onto the A-1210L nose rib. So far so good, then the assembly is riveted onto the inboard end of the left flaperon’s spar. I almost got myself into trouble because I was going to rivet the second A-1208 bracket onto the A-1210L nose rib but the only thing preventing me from doing so was my deviating from the plans with the assembly order … thought it best to wait until after the left flaperon was completed before doing any work on components for the right flaperon. That way if it was necessary to order replacement parts due to a screw up, it would only be parts for one flaperon. 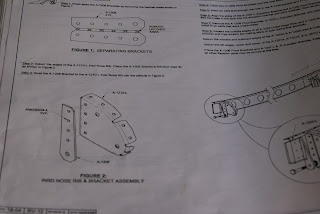 Instructions for creating the A-1210L nose rib/bracket assembly.
Because a mirror’s reflection would not roll the components of the reflected image (or part mumbers) from the inside of a structure to the outside of a structure, on the surface of things one would think the second A-1210L nose rib/bracket assembly would also be placed at the inboard end of the right flaperon spar but flipped around ... NOT SO! Fortunately, a while back, time was taken to review how parts fit together and quickly realized when the A-1207R actuator was placed on the flaperon’s right spar, the actuator’s bolt hole dictates correct positioning the A-1210 nose rib/bracket assembly ... and the A-1210L assembly would not fit correctly at that location. 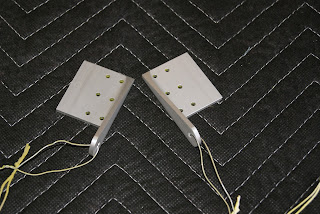 A-1207 L&R actuator brackets (these used to be fabricated by the builder).
The right A-1210R nose rib was tested and it appeared to fit correctly ... but that rib is inside the left flaperon about a third of the way from the inboard edge.  So it can’t be a mirror image as suggested in the instructions. Knowing the parts appeared to fit if the left nose ribs were reversed with right nose ribs, guessed that must be what Van’s wanted ... but that is not a mirror image as suggested in the instructions. So thinking I must be more daft than usual and missing something, a call was placed to Vans for clarification. Well, the positions of the right and left nose ribs are flip-flopped as I guessed and the aft ribs can be left facing outboard as on the left flaperon. However, I found it interesting Van’s builder support still considered that to be a “mirror image”. Sorry Van’s … words mean things, technically it is NOT! We agreed to disagree.
Bellow is a photo of Van’s left flaperon drawing with blue arrows pointing to the ribs that need to be flip flopped to create the “Oregon Mirror Image” followed by a photo of the correct placement of the A-1208 bracket on the left and right A-1210 nose ribs. 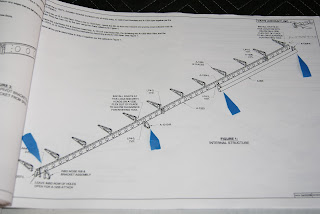 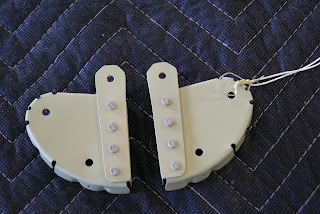 Correct placement of A-1208 brackets on the A-1210 nose ribs ... the
A-1210L nose rib is on the left and the A-1210R nose rib is on the right.
Honestly, all that would have been necessary to head off any confusion for the builder would be to add another sentence in the instructions saying rivet the remaining A-1208 bracket onto the A-1210R nose rib and say the position of ALL the R & L nose ribs are flip-flopped when assembling the right flaperon. Problem solved.
Posted by John at 2:10 PM