While waiting for the pre-closeout EAA technical councilor inspection of the right wing tomorrow, work continued on preparing wing tip parts that will be needed later during the closeout.

The dimples are easily made by using two dimple dies back to back with a washer placed between them INSIDE the rib and a specially fabricated nail to hold the dies in alignment. As the pneumatic squeezer’s piston pushes outward the male tip on the die pushes the nail into a yoke without a set as the dimple is being created. A washer with tape on it is placed between the yoke and the rib to prevent the yoke from marring the rib. This works great! 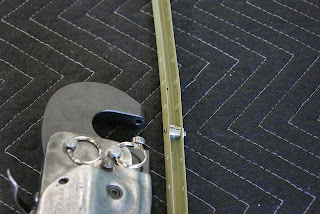 The setup – pneumatic squeezer and yoke without a set in the hole, two females dimple dies back to back with a washer between them INSIDE the aft wing tip rib. All this is held in place with a specially crafted nail with washer to prevent the yoke from marring the rib. 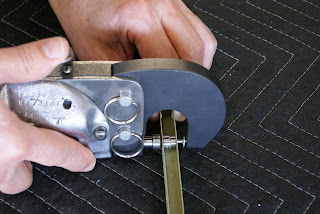 About to squeeze the dimple … note how the nail will slide into the hole in the yoke as the squeezer’s piston pushes out. 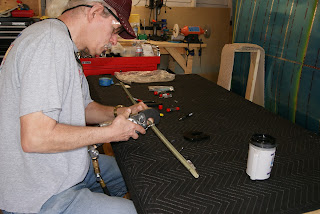 One side effect I forgot to mention when discussing this process for the left wing is the rib will become slightly deformed because the rib is a U channel … all the dimples will put a small bow in it which needs to be corrected by a little fluting. Builders attempting dimpling of their RV-12 please take note: The aft wing tip rib has a natural bow or curve to begin with … however, the web of the rib which will be the outer edge of the wing needs to be straight and flat but after dimpling, it takes on a small curve as well. This small curve is easily taken out by slightly fluting the rib. Before dimpling, the natural curve of the aft wing tip rib was traced onto a piece of cardboard … after dimpling and the follow-up fluting, the curve can be verified to be close enough to move on. 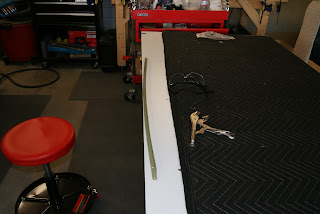 This is the curve that is normal for the wing tip rib. 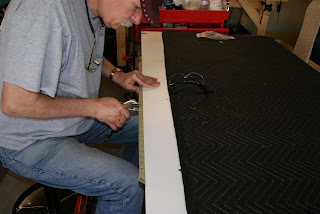 While holding the web of the aft wing tip rib onto the edge of a table, the rib is fluted as necessary at the location the rib departs the edge of the table. This will take the curve/twist out of the rib … small amounts of fluting are done to both sides of the rib. This rib is almost perfect now.
After the aft wingtip dimpling was completed, work started on the bottom wing tip skin. Because there will be a navigation/strobe light installed on the wing tip, an access hole needed to be cut into the W-1204D-R bottom skin. The template for the cutout was placed on the skin and the outline for the hole traced onto the skin and then cut with a jig saw. 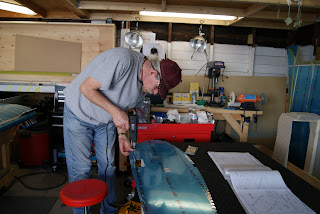 Drilling holes with a step drill to allow access for the jig saw. 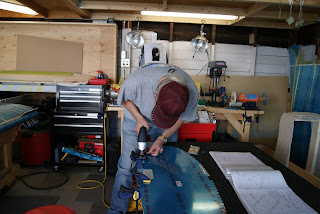 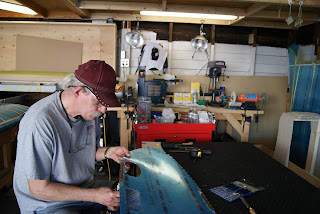 Smoothing the freshly cut wiring access hole in the W-1204D-R skin with a ScotchBrite wheel.
The last task of the day was bending all the tabs on the W-1204D-R  wing tip bottom skin to the specified angles. The same process that was employed on the left wing to verify the tab angles using a digital level was employed again. First the digital level is placed on the plane the measurement will be taken on ... then the bevel button is pressed to zero the level to the slope of the workbench. The tab is bent to the specified angle using the tool Van’s has the builder fabricate from wood ... then the angle is verified with the digital level. 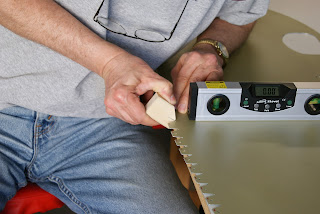 Using the specially fabricated bending tool to bend one of the tabs
on the W-1204D-R bottom wing tip skin to the specified angle. 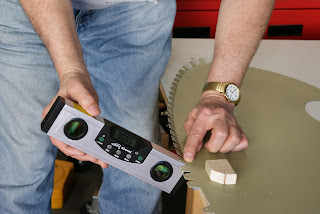 Using the digital level in the bevel mode to display the angle of the tab which, in this case, was 30 degrees. 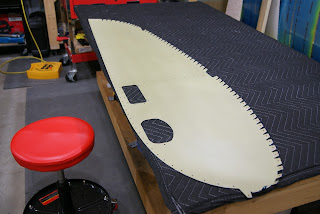 Finished W-1204D-R wing tip bottom skin with freshly cut wiring
access hole in the foreground and bent tabs in the background.
Posted by John at 9:42 PM