In preparation for riveting, the blue protective film was removed from along the rivet lines of the three top skins and the edges of the skins received a final sanding. 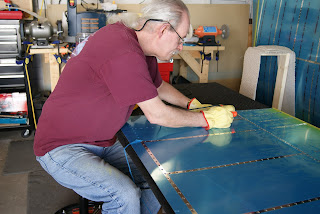 Using a solder iron and straight edge to melt lines into the blue film so it can be pealed off along the rivet lines.
The W-1201B-R inboard top skin was set in place and “pinned” in position using rivets at those locations which pass through the single flanges on the W-1210 aft ribs which are located underneath the main spar. The rivets are set in place by hand and then verified by using a light and mirror that the rivets go through the flange. 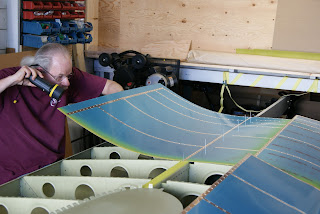 Using a flashlight and mirror to verify the rivets used to “pin” the W-1201B-R
inboard top skin actually go through the forward flanges of the W-1210 aft ribs. 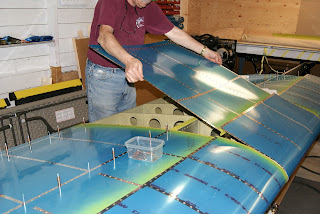 Setting the W-1202B-R center skin in position.
The W-1201C-R doubler plate for the wing walk needed to have its edge broken. Unfortunately, as with the left wing’s wing walk doubler, the skin was already dimpled so the Cleaveland edge forming tool can’t be used … bummer. RV-12 builders, break the leading edge before dimpling you will be glad you did.
Readers keeping tabs may remember the left wing walk doubler plate was placed against the edge of the workbench and worked with a PVC pipe cap until a small amount of break was achieved. It was a hassle. Hate to admit this, but I actually had a tool that would work but forgot about having purchased it. The Cleaveland tool is the cat’s meow, so the one from Avery went into the deep dark recesses of the tool box and was forgotten about. The other day it was discovered while hunting for a tool so decided to try to use it because the rollers are way way narrower than the ones on the tool. Because of the smaller rollers, the Avery tool can roll along the edge of the skin between the edge and the dimples. It is not easy, but after a few passes I could see the edge was beginning to break. 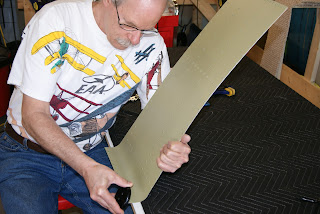 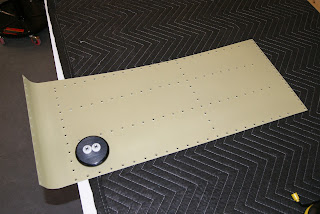 A good look at the small rollers of the Avery edge forming tool.
Now that the wing walk doubler plate was ready for assembly, the skins underneath where the doubler plate will be attached were scuffed with a Scotch-Brite pad, cleaned with Acetone, then sprayed with zinc chromate primer. 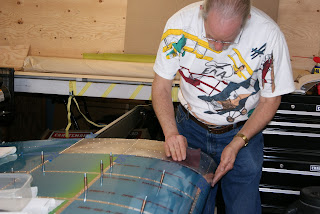 Scuffing the area that will be underneath the wing walk doubler to prepare the metal for primer. 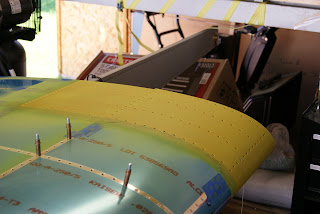 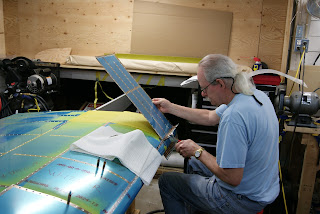 Attaching the W-1201C-R wing walk doubler onto the right wing’s inboard skins with Clecos.
Posted by John at 9:29 PM