The first order of business today was to finish up placing every available #30 Cleco in the shop into the right wing's W-1201B, 02B and 03B upper skins to secure them onto the right wing skeleton. As with the left wing, Van’s assembly order was modified because the shop is outfitted with enough Clecos to secure all three of the upper wing skins at one time. Riveting began by riveting the leading edge of the wing walk doubler aft to the same point the riveting was halted prior to placing the top skins into position. Riveting then continued by riveting one row of rivets at a time working from the center of the wing towards the outer edges. The removed Clecos were then moved further aft to populate empty rivet holes. 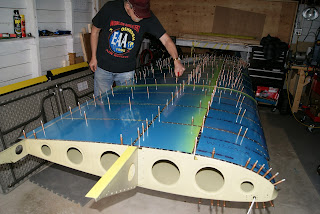 Placing Clecos into the upper wing skins to secure the skins for riveting. 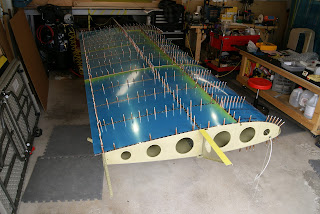 All three top skins are secured with Clecos and ready for riveting to begin. 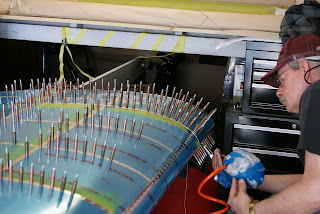 Using the pneumatic rivet puller to set the first of many flush rivets into the W-1201C-R wing walk doubler plate. 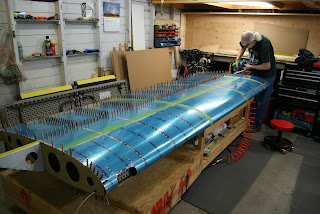 Setting the last flush rivet forward of the main spar.
It was getting late so worked was halted for the evening leaving the line of rivets in the main spar as the next location for riveteing when work continues tomorrow.
Posted by John at 9:12 PM