Having the left flaperon’s spar sitting on the bench along with the drawings, quite a bit of time was spent reviewing the assembly instructions and what, if any, impact would be created by dimpling the underlying components. Also under scrutiny, was accessibility for the pneumatic squeezer and the feasibility of attaching components to the flaperon’s spar using solid rivets.

A lesson learned on Pete’s airplane when drilling the round stainless pipe is that drill bits tended to walk big-time … plus the stainless pipe dulls drill bits rapidly so they need to be changed often or they will walk. The walking issue can be mostly eliminated by taking a couple interim steps ... first center punch the hole, then use a tiny drill bit to make a small crater in the stainless pipe at the center punch location. Follow this by drilling with a SHARP & LUBRICATED #40 drill bit all the way through the pipe. Once a #40 hole is in the pipe, the #30 drill bit will go through the pipe like butter. 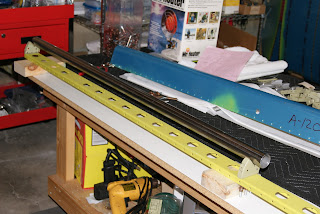 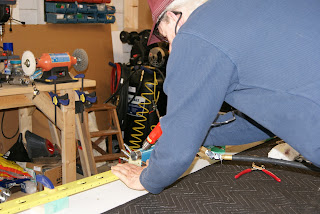 Here is where DOG Aviation deviates temporarily from Van’s assembly instructions. Because access for riveting the flaperon’s internal ribs using the pneumatic squeezer has been deemed acceptable, the stainless pipe will be left off until all the ribs are riveted with solid rivets. There is just enough clearance to rivet the stainless pipe onto the nose ribs afterwards, using the close quarter hand rivet puller.  Why the change? That stainless pipe adds so much mass to the flimsy structure, that having the pipe riveted in place then repeatedly flip flopping the spar for rivet squeezer access would be a recipe for disaster. Trust me … when the counterbalance pipe is in place, the RV-12 builder will want to make certain the spar/pipe assembly is ALWAYS clamped to a bench. Mine almost slid off once while reviewing the assembly procedures and another builder on the forums had his fall off his workbench kinking the spar which subsequently required replacement.

There is one small problem to overcome … the stainless pipe also still needs to be match drilled to the row of holes on the nose skin. The pipe requires being in its permanent position as if it were riveted in place … so it was temporally secured into position with hardware so the A-1201C nose skin could be placed over the assembly for match drilling into the stainless pipe. 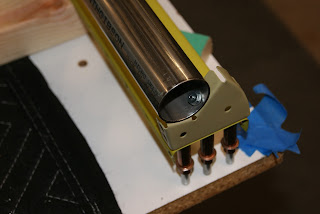 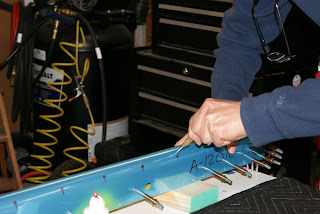 Placing a center punch mark in the stainless pipe at the center point of the hole in the outboard nose skin. 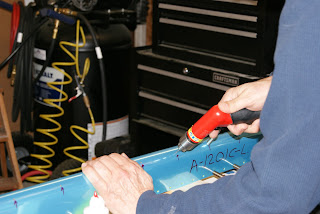 Using a very small drill bit to make a tiny crater in the stainless pipe at the center punch
location … no need to drill all the way into the pipe all that is needed is a small crater. 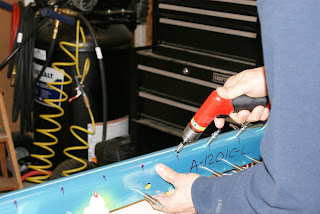 Using the small crater to help hold the position of the #40 drill bit,
the hole is carefully drilled all the way into the stainless pipe. 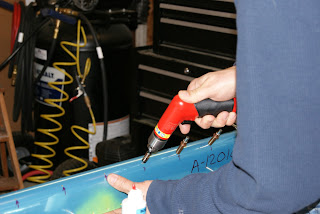 The #30 drill bit will now go through the stainless pipe like butter without drifting. 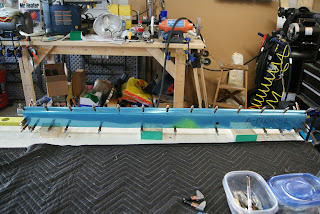 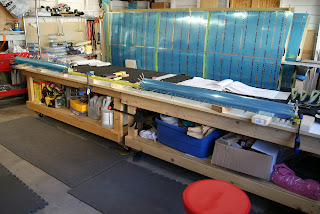 For a brief moment, countersinking the stainless steel pipe for flush rivets was pondered. Fortunately, some semblance of sanity returned and that idea was determined to be folly because when the flaperons are installed onto the wings, the nose of the flaperon is hidden from view underneath the overlap where the wing’s top skins extend aft of the rear spar.
Posted by John at 9:10 PM