Assembly of the left flaperon has progressed slowly mostly due to only having the opportunity to work in small snippets as of late. Then of course there is the DOG Aviation approach of making the simple complicated and time consuming … such as dimpling, priming, using solid rivets on skeleton components wherever possible, melting the plastic film away from rivet lines using a soldering iron, not to mention  smoothing the edges of parts that will never be seen.

With two exceptions, all the components that attach to the flaperon spar were attached using solid rivets in place of LP4-3 pop rivets. The assembly order of the components was also changed to facilitate the use of the pneumatic squeezer. Riveting the actuator bracket requires care because the rivets are VERY close to the actuator’s web. Suggest placing the factory head of the AN470AD4-6 rivets on the spar and forming the shop head on the actuator using a SMALL diameter rivet set … if a large rivet set is used, it will gouge into the actuator’s web because the clearance is very tight. 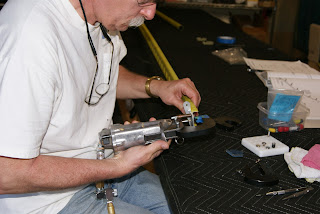 Riveting the flaperon’s actuator bracket onto the left flaperon spar with the pneumatic squeezer. 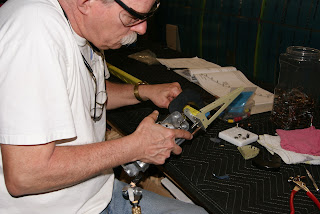 Riveting the inboard A-1205 aft rib onto the actuator/spar assembly with AN470AD4-6 rivets. 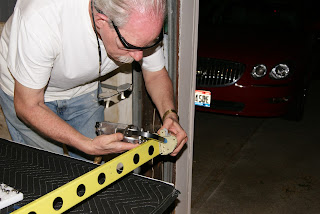 Riveting the inboard nose rib onto the left flaperon spar with AN470AD4-4 rivets. 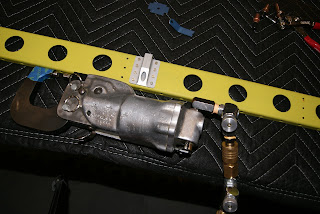 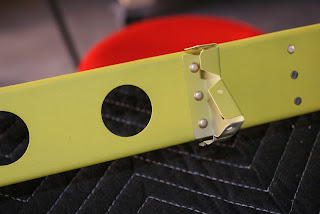 Counterbalance nose rib riveted onto left flaperon spar with AN470AD4-4 rivets.
The two locations that have a nose rib and aft rib sharing the same rivet holes in the flaperon spar proved problematic for the pneumatic squeezer … the far outboard rib location and at a point approximately one third in from the inboard edge of the flaperon. It was easy to set a solid rivet in the center hole of the outboard pair of ribs … however, the upper and lower holes proved problematic because the body of the squeezer was hitting the aft rib and not able to get directly square on the rivets so LP4-3 pop rivets were used.
To allow for a solid rivet to be set in the ribs at the point a third of a way in from the inboard portion of the flaperon, the aft A-1205 rib was flipped around so the direction of the web on the aft rib matched the direction of the A-1210R nose rib’s web. This allowed the pneumatic squeezer access to set a solid rivet in center rivet hole. Flipping the A-1205 rib poses no assembly problems because the rivet holes in the aft ribs are totally symmetrical. 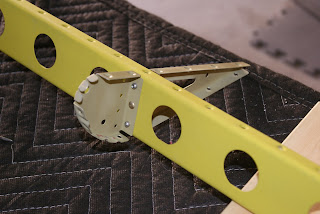 One of the two locations where a solid rivet was set in the center rivet hole where a nose rib and aft rib share the same holes in the left flaperon spar … upper and lower holes have LP4-3 pop rivets. 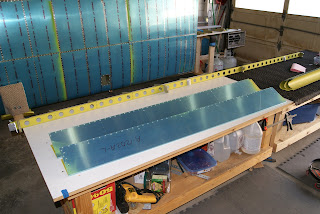 Completed flaperon skeleton assembly with the exception of the counterbalance
which will be installed after the aft skins in the foreground are riveted in place.
Posted by John at 8:02 PM