After the minor production setback yesterday and running errands earlier today, not as much forward progress was made for the day as hoped. That said, the W-1204A and W-1204B upper wing tip skins were riveted onto the right wing skeleton with flush rivets and the forward wing tip rib was fluted to conform to the curve on the W-1204A-R tip skin. The wing was also flipped over so the long narrow portion of the W-1204A-R tip skin that wraps around the right wing's leading edge and back to the main spar could be riveted.

On the left wing, the deep fluting of the forward tip rib created little divots or puckers along the outer edge of the forward tip rib that could be seen under the W-1204A tip skin. In an effort to minimize that on the right wing, the fluting was done more carefully by only fluting the outer half of the tip rib’s flange and the result was much better … however, there were still a few small divots created. Guessing the main reason for this a combination of not all of the rib ends up under the W-1204A tip skin and the flutes need to be made deep to conform to the curve so the metal is really pulled quite a bit as can be seen in the following photos. 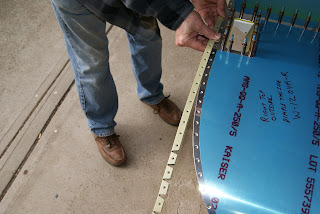 The fluting begins just aft of where the tip rib departs the edge of the W-1204A tip skin. Both sides of the rib require fluting to avoid twisting the rib. Having learned from working on the left wing, the fluting pliers were not placed any closer to the web of the rib than the center of the rivet holes. The flutes are made shallow at first, but as the curve in the W-1204A increases the depth of the fluting must increase as well, to make the tip rib conform to the curve. 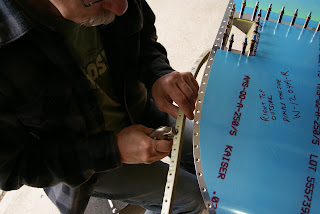 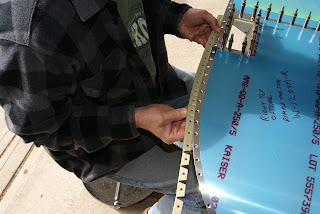 Almost there … just two more locations that require fluting.
One thing that was discovered on the left wing, the very forward location on the tip rib that needs fluting required DEEP flutes to create the necessary curve.  The deepness of the flutes created a deep divot or puckering at the outside edge of the rib. On the forums, a builder suggested making two flutes moderately deep side by side (yes, there is room) as opposed to one huge crater of a flute like the one on the left wing. So that method was tried and I have to say, that was a great idea ... there is still a little divot created, but not nearly as pronounced as on the left wing. 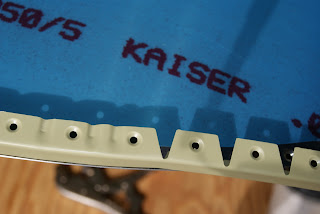 The two moderately deep flutes at the font end of the forward tip rib as opposed
to one really deep flute greatly helps minimize the deformation of the rib’s web. 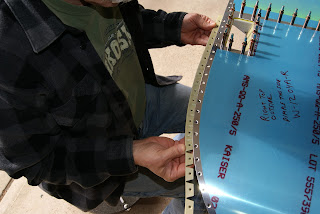 The finished product … the forward tip rib now follows the curve of the W-1204A-R forward tip skin perfectly.
Upon completing the fluting of the forward tip rib, riveting began on the upper tip skins and then the forward and aft tip ribs were attached to the W-1204A & B wing tip skins with Clecos. As with the left wing, the plans have the builder cut the bottom of the rear spar at the far outboard end to eliminate the interference with the aft tip rib. After the interference was eliminated, the aft tip rib was riveted in place and then the wing was flipped over so the bottom tip skin can be installed. 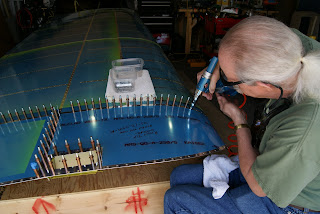 Riveting the top side of the W-1204A-R forward wing tip skin onto the right wing skeleton with flush rivets. 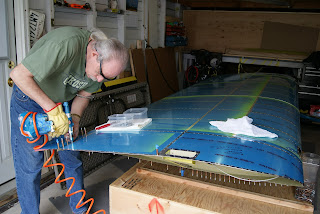 Finishing up the riveting on the W-1204B-R aft wing tip skin. 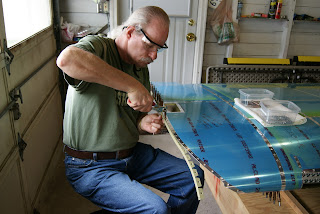 Securing the forward tip rib onto the W-1204A-R with Clecos. 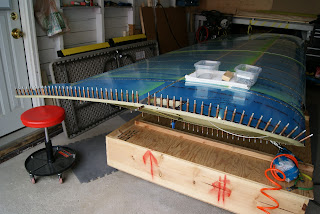 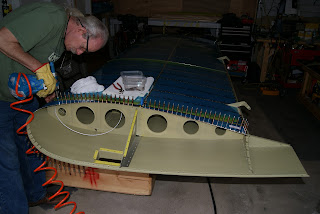 Riveting the portion of the W-1204A-R wing tip skin that wraps around the bottom of the right wing.
Posted by John at 8:56 PM