The riveting of the flaperon skins onto the RV-12’s left flaperon skeleton went smooth ... well sort of, more on that later. Deviating from the plans, the aft skins were riveted first from the center outwards … beginning with the aft edge of the top surface and working forward towards the spar one row of rivets at a time. After the aft skins were riveted onto the ribs, the stainless steel counterbalance pipe was riveted onto the seats on the two outer most nose ribs … access was tight, but by using the close quarter hand rivet puller, riveting of the counterbalance was not an issue. 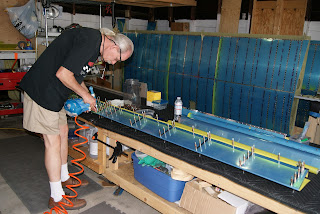 Setting the first rivet in the left flaperon aft skins - starting at the center of the trailing edge row of rivets on the top skin.

After completing the top surface, the flaperon assembly was flipped over for riveting of the bottom surface. The aft most row of rivets on the trailing edge posed a similar challenge as the aft wing tip ribs did. The rivets along this row hit the rivet already set on the other side and do not seat fully. The hand rivet puller was used to set the rivets using the same method used on the wing tips by using downward pressure on the rivet puller and slowly setting the rivet down into the hole as the handle on the squeezer is slowly depressed. 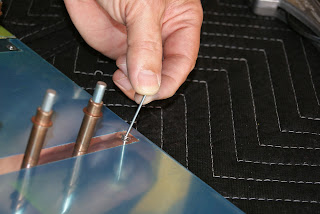 Rivets set proud along the aft most trailing edge row of rivets on the
bottom of the flaperon due to interference with top surface rivet. 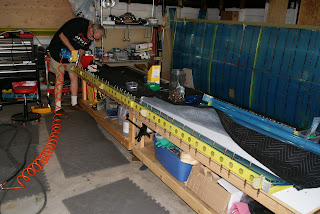 Setting the last rivet into the left flaperon’s aft skins before the nose skins are attached. 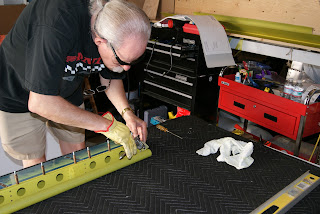 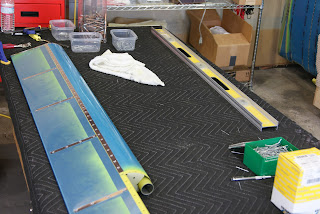 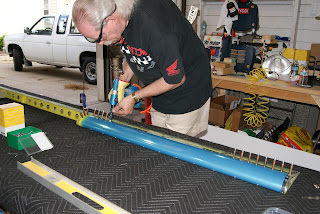 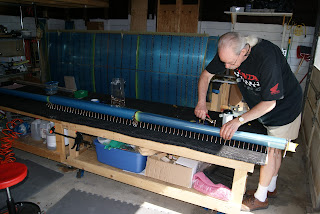 Securing the inboard nose skin onto the left flaperon skeleton with Clecos to hold its position for riveting. 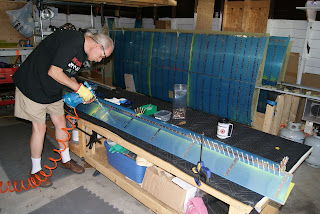 Using the pneumatic rivet puller to rivet the nose skins onto the left flaperon skeleton with flush rivets. 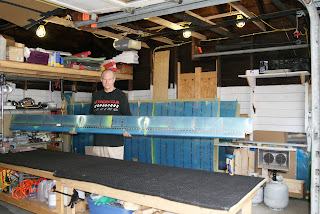 Presto! A completed RV-12 left flaperon riveted with mostly solid rivets inside and flush rivets outside.
Posted by John at 10:05 AM