One Step Forward Two Steps Back

The removal of the blue protective film from the rivet lines on the right wing’s upper tip skins was completed, followed by a final sanding of the edges on the skins. The W-1204A & B skins were set in place and secured with Clecos in preparation for riveting. 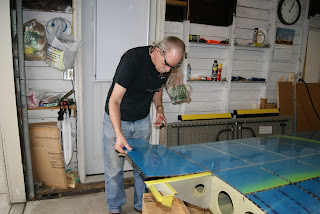 Setting the W-1204B-R aft wing tip skin in position to secure with Clecos. 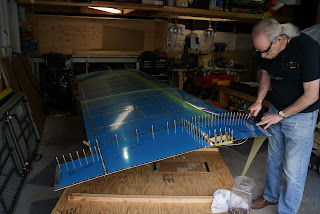 Placing Clecos into the W-1204A-R forward wing tip skin.
After a few moments of admiring the handiwork, the glee quickly faded to gloom … unfortunately, it was discovered the overlapping areas on the W-1203 skins weren’t primed. Fortunately, the oversight was caught before the skins were riveted tighter. The DOG Aviation paint department fell down on the job and forgot to spray the overlapping areas with primer. Taking two steps back for the day, the tip skins were removed and passed over to the paint department for a quick spritzing with primer.
Long time friend Bernie stopped by to visit, and at a good time ...  he helped with the masking of the outboard edges of the W-1203 wing skins which received a thin coating of zinc chromate primer as well as the forward edge of the W-1204B-R skin. After the primer was dried, Bernie assisted with the reassembly of the W-1204A & B wing tip skins. 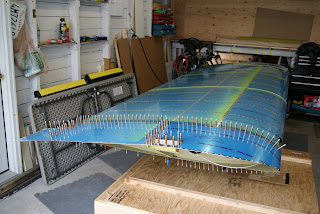 After the primer dried, the W-1204A & B tip skins were reassembled
and secured with Clecos (for the second time) and readied for riveting.
Being put off by the need to dissemble, then reassemble the wing tip components, decided it best to postpone riveting of the tip skins until tomorrow.
Posted by John at 5:57 PM

Email ThisBlogThis!Share to TwitterShare to FacebookShare to Pinterest
Labels: Wings