Affirmation that true progress is being made is when the Van’s shipping crate no longer contains parts requiring assembly and can be removed from the shop to be broken down. 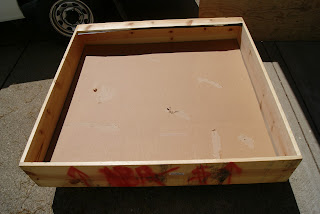 The sign of true progress … the empty shipping crate that previously contained the components for the RV-12’s wings.

This turned out to be a non-work day but productive none the less. The completed right wing was placed into the wing rack and is now keeping the left wing company.  In preparation for assembling the two long flaperon assemblies, the shop was completely rearranged and the two workbenches were clamped together and leveled as best as possible … which basically is impossible because the shop floor is not only wavy, but cratered as well. 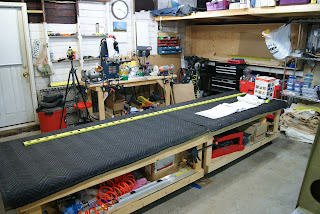 A flaperon spar spanning almost the entire length of the two workbenches.
Posted by John at 8:14 PM