The A-1202A & B aft flaperon skins posed a unique challenge. Dimpling the top and bottom aft most rivet holes in the very narrow “V” of the skins required some creative thought because the dimple dies with the holes in them for a nail to be used with a hand rivet puller would not work. The nail could not be placed in the rivet hole because of its length interfering with the narrowness at the bottom of the “V”. Not wanting to relax the bend in the metal to gain access, another method was developed which proved to be a little time consuming, but ultimately worked well.

A #6 screw, nut and washers were used in conjunction with the dimple dies that have the holes in them to form the dimples. However, it first required a considerable amount of filing to custom fit the #6 screw to the dies. The tops of the threads on the screw required gentle filing with a diamond file … but just enough so the screw could barely slip into the dimple dies, this took a little time to get it right. 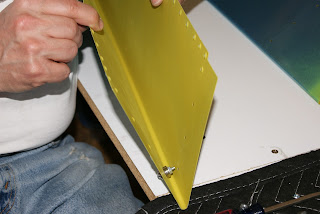 The filed #6 screw, nut and washers in place and ready to form a dimple. 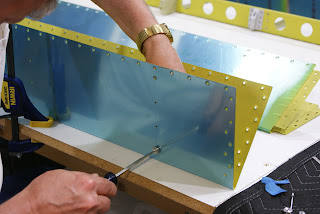 Creating dimples in the hard to reach holes - pulling the dimple dies together
by tightening a filed #6 screw with a screwdriver while holding a wrench on the nut. 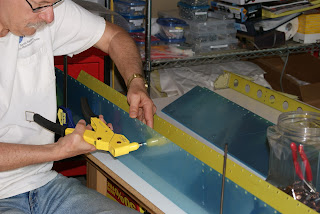 Using the hand rivet puller to create dimples by pulling on a nail placed through the dimple dies. 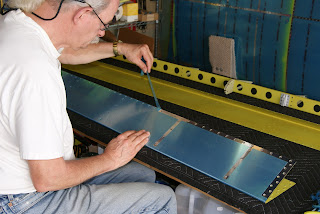 Pealing off the protective film from along the rivet lines on one of the flaperon’s aft skin. 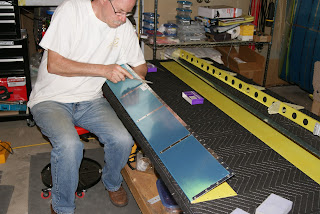 Smoothing the sharp edge on an aft flaperon skin with a file. 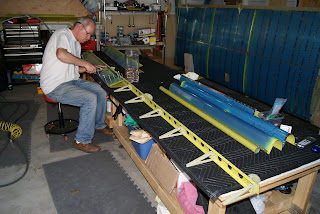 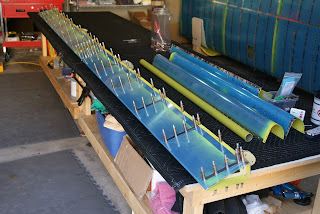