The W-1201R and W1203R inboard and outboard skins were aligned to the right wing’s skeleton with rivets used as aligning pins. As done on the left wing, the tabs on the W-1210 ribs (which are under the spar) had rivets placed in them by hand and then verified they were in each of the tabs before any Clecos were used to secure the skins. Next all the corners and flanges under the rear spar had rivets placed in them by hand as well to ensure positioning before Clecos were installed to secure the skins onto the right wing skeleton.  In my case, with all the dimples to help hold positioning, all that was probably overkill. But it sure does a great job of aligning the skins to the wing’s skeleton … so I can recommend that process to fellow builders who don’t have dimples to help hold the positioning of the parts.

Once the inboard and outboard skins were secured in position with some Clecos, the W-1202R bottom skin was prepared for assembly by removing the blue protective film from the rivet lines followed by a quick smoothing of the skin’s edges with the 3M foam sanding blocks. 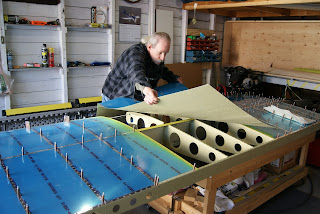 Placing the W-1202R center bottom skin onto the right wing’s skeleton.
The W-1202R bottom center skin was then secured onto the right wing skeleton using the same method mentioned above followed by adding many more Clecos to all three skins. This is a slight deviation from the plans which would have the builder Cleco and then rivet one skin at a time (which I suspect is due to the small number of Clecos Van’s says is necessary to build the RV-12). The DOG Aviation procurement department purchased far more Clecos then the suggested minimum, so all three skins will be riveted at one time. Knowing from having worked on Pete’s RV-9A (which incidentally has just received an airworthiness certification from the FAA, so first flight will be any day now - congratulations Pete!!!), one can’t have too many Clecos when building an all aluminum aircraft. 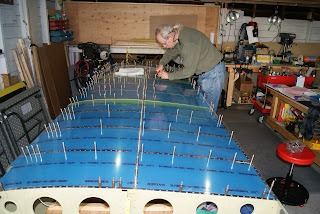 Securing the right wing’s W-1202 bottom center skin onto the right wing’s skeleton by using a center punch to help align the underlying rib before placing a Cleco into the adjacent rivet hole. 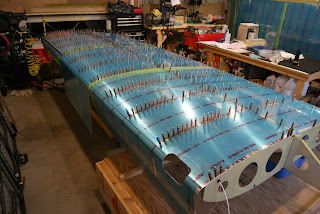 All bottom skins now secured with Clecos and ready for a mass riveting session.
Posted by John at 7:50 PM