As is often the case when performing a task a second time, we discover that making subtle changes in the way the task is completed can make the task easier and much quicker to complete. This was the case for using the template for the right wing’s landing light. A few days ago, the hole for the landing light was cut into the W-1203R wing skin, so that part was out of the way but the template was needed once again to mark the locations for the drilling of eight holes for the lens backing strips along and the ten holes for the landing light’s mounting ribs.

Van’s instructions assume the template (which should measure 16” x 10 9/16” at the borders) is being used on a completed wing which is already riveted in place. They would have the builder cut up the template so it fits between the wing tip skin and the rivets installed on the inboard rib from the landing light hole. In my case the tip skin is not installed yet.

I decided a different and ultimately easier approach was necessary for aligning the template than the way it was done on the left wing. The procedure employed on the template for the left wing’s landing light was to attempt aligning the slippery template while holding a light inside the wing and moving the template around until the rivet hole marks printed on the template closely matched the holes in the W-1203R skin. As an added bonus to make the task even harder, because the skins were already dimpled, the cone shape of the dimples would give false alignments unless the light was placed literally directly under the rivet holes. … it was a total hassle and a time sucking abyss.

Having a few weeks to ponder a better alignment method resulted in a solution for easily aligning the template, which DOG Aviation can highly recommend for both adding a light into a finished RV-12 wing or during the wing build (as in my case). The solution is to  carefully extend the center lines used for aligning the template out to both edges of the template and draw lines on the wings through the centerlines of the rivets or holes. Lines were drawn on the wing from the very outer edge of the W-1203 wing skin, through the center line of the rivet holes on the skin Van’s wants the user to use for alignment, to a point past the template (when left intact) that ended up being the third rib inboard. This was carefully done using a small tipped sharpie marker. Next the center lines already on the template for the rivet holes to be used for the alignment were extended out to both edges of the template using a mechanical pencil with a very fine lead. The template page was then cut on the line showing the outboard edge of the W-1203 skin. Since a picture is worth a thousand words, if one looks closely at the photo below, the lines drawn on the wing and the template I’m referring to can be easily seen. This same procedure was used to mark both the top and bottom in two separate steps as Van’s suggests by marking one side then flipping the wing over and repositioning the template again for marking the other side. 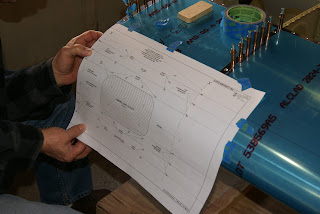 Aligning the template to the lines drawn on the W-1203 skin which go
through the center of the line of rivet holes to be used for alignment.

This method worked great! It was a snap to align the template in this fashion and tape it in place so the eight holes for the landing light’s backing strips and ten holes for the light’s mounting ribs could be center punched and drilled. A suggestion would be to back off the spring tension so as not to dent the thin wing skin and also support the skin from underneath while center punching. After center punching, a very small diameter drill bit was used to drill lead holes, followed by drilling to #40 then final drilling to #30. 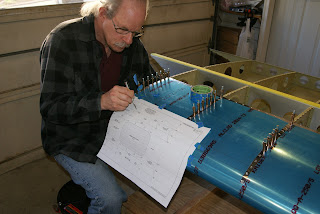 With the template aligned and secured in place, a spring loaded center
punch adjusted for low impact was used to mark the holes for drilling. 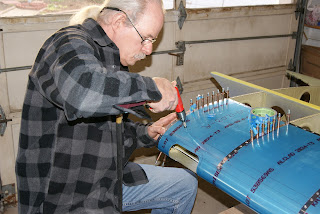 Using the pneumatic drill to drill out all the pilot holes to #40.
Posted by John at 6:54 PM