After having 80 degree temperatures just a couple of days ago, it was quite a shock seeing snow on the roof of DOG Aviation this morning. Braving the barely 40 degree morning in the shop the propane heater was used to quickly take the chill out of the air so progress on the RV-12 could continue in comfort.

The right wing’s stub spar was the next item up for riveting. As on the left wing, the stub spar is attached onto the six innermost W-1208 nose ribs. 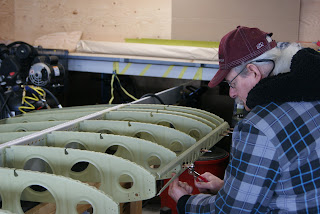 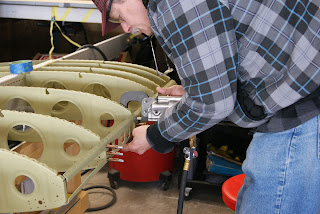 Riveting the right wing’s stub spar onto the W-1208 nose ribs with the pneumatic squeezer. 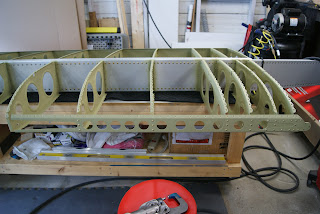 Right stub spar riveted onto W-1208 nose ribs … now the wing skeleton
is complete and ready for electrical then covering with wing skins.

The right wing skeleton was complete once the stub spar was riveted in place with the exception of the wiring … so work began on the right wing’s wiring. Once again, Heyco SB-437-5 snap bushings were substituted for the smaller snap bushings Van’s supplied for the wing’s wire run. This is because of the upgrade to the thicker three conductor 20 gauge shielded cables for both the landing light and navigation/strobe lighting. Once the cables were pulled through the snap bushings, work began on the eight pin blue electrical connector at the root of the wing.
The same technique was used as employed on the left wing’s electrical connector. A few inches of the cable’s outer coating was stripped off and the inner three wires were fished through the shield then the shield was pulled back and covered with black heat shrink tubing. 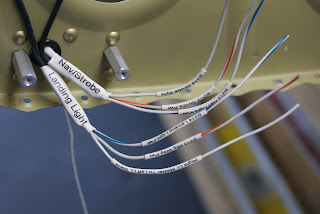 Prepared wiring ready for connector pins to be crimped onto the wires. 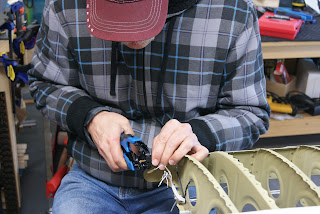 Using the crimping tool to crimp connector pins onto the ends of the wires. 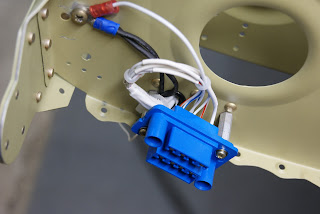